In a gold spot 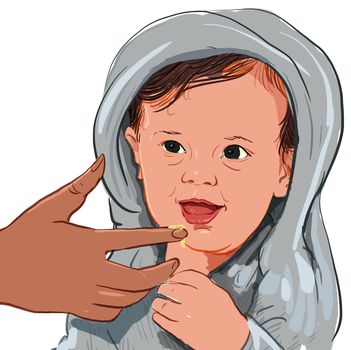 WE OFTEN ask our parents what sort of a baby we were. Were we adorable or unbearable? Noisy or plain fussy? Or worse, both? The answers to these questions never quite reveal the bizarre and brazen adventures that some of our parents managed to pull off with us.

Take, for instance, the custom of thrusting a spoonful of gold into a newborn’s mouth. It is one of those questions that we would have never thought to ask until we turned parents ourselves and hoped to orchestrate an Ambani-esque moment for our own babies. After all, who doesn’t want their child or grandchild to be born with a golden spoon? Not many, considering this practice (and variations of it) is quite common, especially in the southern states.

In many parts of Kerala, across communities, gold that is rubbed against a stone and mixed with honey or mother’s milk is fed to a newborn, minutes after its birth.

The significance of this custom lies in the underlying belief that gold lends an air of aristocracy and power to the person who consumes it. It is also mistakenly believed that the expensive metal can lend radiance to a baby’s complexion. Many Tamil homes, in fact, have a gold coin or strand embedded in a metal plate or cup from which the child is fed her meals. This is a way to include gold in the child’s diet.

However, gold is non-reactive to external surroundings (whether acidic or alkaline in nature)—a trait that has earned it the name of 'noble metal' in the world of metallurgy. Any amount of gold that is ingested (in its metallic form), therefore, holds neither any benefit nor harm and will be passed out in the stools of the baby.

The medical community is, however, opposed to any kind of prelacteal feed (any food given before mother’s breast milk) and insists that nothing (not even water) is required for an infant for the first six months.

Many families fearing the repercussions of gold ingestion as well as honey (which can increase the risk to infant botulism) have now done away with feeding gold to their babies and instead just press a gold ring or cross or chain to the baby’s lips as soon as it is born as an act of invoking God’s blessings.

When bottled or canned food is not sufficiently preserved, it becomes a breeding ground for the bacterium Clostridium botulinum, which is capable of releasing botulinum toxin that causes infant botulism.

When honey containing this bacteria is served to an infant, the bacteria enters the baby's intestinal system as spores and begins to colonise the nearby surroundings. The underdeveloped intestinal system of the infant is unable to fight back. The spores successfully germinate and release botulinum toxin into the bloodstream.

Consumption of honey that is not properly processed and preserved can gradually lead to paralysis of limbs and even loss of breath in babies. This is why the World Health Organization recommends that honey be avoided until the age of one.

Next issue: From golden spoon to golden hour