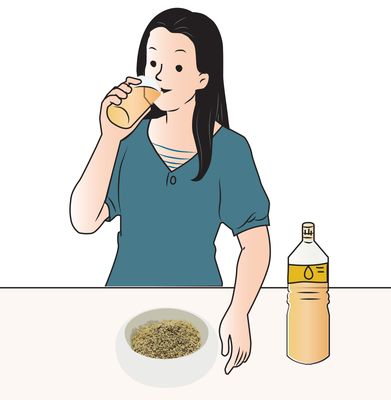 There are a lot of traditional practices that surround pregnancy and infant care in our country. Some of them are elaborate rituals; others quick-fixes and two-minute recipes.

Having ajwain water (water in which ajwain or carom seeds have been boiled) is one such practice. Often given to a mother in her later stages of pregnancy when she suffers from increased levels of heartburn or right after she has had a baby, ajwain water has multiple benefits.

In ayurveda, carom seeds are considered an appetite stimulant as well as a vaatanaashak (destroyer of wind, digestion related issues, abdominal cramps and pain). Right after delivery, a woman may experience weakness, loss of appetite, constipation or irregular bowel movements. Ajwain water is considered a good way to mitigate each of these issues. Other ingredients used for similar purposes are suva ka paani (dill water) and jeera ka paani (cumin seed water).

In the olden times, infusing water with a condiment or herb or spice was also a way to serve boiled water and thus reduce water-borne infections to a mother.

Several pharmacological studies undertaken in the past few decades have also confirmed ajwain’s carminative (relieving flatulence), digestive, antimicrobial, appetite stimulating, anti-inflammatory and anti-spasmodic properties that have been harnessed in the ayurvedic school of healing for centuries.

These studies have shown that much of ajwain’s healing properties has to do with a component called thymol, which makes up 50 per cent of the seed’s composition. Thymol is also responsible for imparting ajwain its sharp taste.

To make ajwain water, take a little less than one teaspoon of ajwain seeds, approximately 2g, and boil it in a glass of water. Drink this water after every meal to bring relief to abdominal cramps or pain and digestion related issues postpartum.

It is also important to remember that a nursing mother cannot and should not fill her tummy with just water even if it has been infused with herbs. She needs to have nourishing food and liquids. Light broths such as rasam, dal ka paani, animal fat or vegetable soups provide energy and much-needed nutrients and satiation.

Next issue: Bouncing back with betel leaves