When is your baby due?

THAT IS PROBABLY the most frequently asked question to a pregnant woman.

But while we ask the question, a majority of us don’t wait for an answer because it is assumed that a baby is due in nine months. Obstetricians will calculate your gestation period as nine months and one week (40 weeks) from your last period to arrive at a due date called estimated date of delivery or EDD. Scans conducted over the next few months will help arrive at more accurate dates.

For a long time, however, (and even now in India) a baby that completes 37 weeks in the mother’s womb is called a term baby or one that has completed the full period of gestation.

So what is the problem with such a definition?

When labour doesn’t begin after 37 weeks, people around the mother, including doctors, begin to wonder and worry. Worry levels escalate to such an extent that planned interventions like C-sections, pricking the amniotic sac and inducing labour are performed even when there is no distress or complication. I would know. It happened to me.

To preclude such unwarranted interventions and include the varying time period of pregnancies, the American College of Obstetricians & Gynecologists (ACOG) came out with a new set of definitions concerning due dates in October 2013. 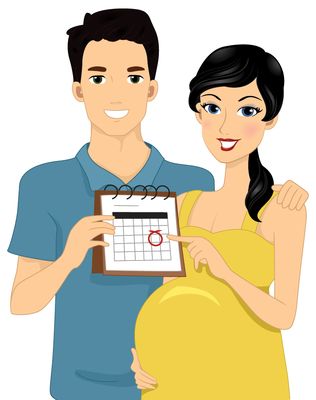 So a baby born

* During the 41st week is late term

The ACOG felt that a little more time in the mother’s womb was beneficial to the baby. Following this, the March of Dimes, an 80-year-old American organisation that focuses on research and best practices for moms and babies, reiterated that it was best to wait until 39 weeks before carrying out an intervention. This is currently being followed across a majority of developed countries.

There is nothing wrong if labour begins early. That is your body signalling it is time. But waiting for labour to begin post 42 weeks can also lead to complications like C-sections (because the baby is too big) or degeneration of the placenta.

The completion of 39 weeks is now considered ideal for optimum growth as it gives the baby a better chance at growing (lungs, brains) and developing skills (such as suckling, moderating body temperature).

In your third semester, talk to your doctor on progress of your pregnancy and, if need be, why you can’t wait until at least 39 weeks are over or labour begins on its own.

◆ Gestation period for humans is roughly 270 days. Same as cows!

◆ Gestation period is largely governed by size of species. So for rats, it lasts 20 days and elephants (550-600 days).

Next issue: What is a birth plan?