It should come as no surprise that millions of undocumented immigrants work in the United States. Until recently, some of them worked at two, perhaps more, of President Donald Trump’s properties. 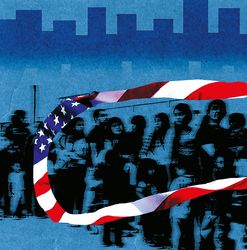 There is no evidence that Trump himself knew undocumented immigrants were working at his clubs. However, two of these employees, both of whom worked at Trump’s Westchester club, told me in an interview that they had worked there for years and had never had any problems. Until they were fired.

“Did the company know you were undocumented?” I asked Gabriel Sedano, a Mexican immigrant who had worked in maintenance at the Westchester property since 2005. “I think so,” Sedano said. “It was a very common practice at the club. I think they did not check them up.”

Margarita Cruz, who is originally from Puebla, Mexico, had worked as a housekeeper at the Westchester golf club since 2010. She gave her account of what happened: “I believe [Trump] wanted to carry out a purge before the government cracked down. He is just cleaning up. He has always said he does not want undocumented immigrants working for him. And now, if the government finally inspects all his employees’ documents, as it should, of course they won’t find anything, because he has already fired all of us.”

The president’s son, Eric Trump, who has day-to-day control of Trump’s properties, explained the dismissal of the workers to the Post as follows: “We are making a broad effort to identify any employee who has given false and fraudulent documents to unlawfully gain employment. Where identified, any individual will be terminated immediately.”

“The system is broken,” he concluded.

The fact that many undocumented immigrants worked at Trump’s properties for years is not surprising. What is surprising is that we pretend that this is something unusual. There are undocumented employees throughout the US, and we all benefit from their labour; they harvest our food, build our houses and apartments and look after our children, taking on the jobs most of us reject.

It is deeply hypocritical for Americans to badmouth undocumented immigrants, given the benefits they provide to society. It would be extremely difficult to find a single American whose life has not been positively affected by these immigrants.

The United States, as everyone likes to say, is a nation of immigrants. Now, that national identity is under siege. Many Americans are frightened by the country’s demographic revolution, and many would prefer that the country stop accepting so many immigrants, documented or undocumented, and instead become a nation of settlers and senior citizens.

Ideally, the 10.7 million undocumented immigrants that now live in the United States would gain legal status. Unfortunately, in our current political climate, this is impossible. Until we have a new president, we can only operate in Trump-survival mode.

Ramos is a veteran journalist and author.