The 58th edition of the Venice Biennale, the oldest biennale in the world, started on May 11. The six month main biennale is curated by US-born Ralph Rugoff, director of the prestigious Hayward Gallery, London. The performance art programme is co-curated by the young Aaron Cezar, director of the Delfina Foundation. Immediately after the first week of the performance programme, he was in Stockholm with us to announce the winner of the Absolut Global Creative Competition. Aaron was one of the global jury members along with me and the eminent American artist, Mickalene Thomas. The award went to the young Lebanese artist Sarah Saroufim. She was selected from 7,500 entrants from 19 countries and received €20,000.

Aaron mentioned to us that he could organise 30 performances in the opening week, and that the closing week, in November, would have more or less the same. The presence of country pavilions are a popular element of the Venice Biennale. The current edition has 87 country pavilions, each displaying the country’s pride in its art and artists. The countries involved bring in PR professionals and celebrities, and, in some cases, heads of state. 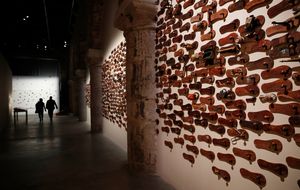 Rugoff curated an eclectic visual plethora with lots of contemporary materiality and sciences. Eighty-three artists were invited for the international exhibitions titled ‘May You Live In Interesting Times’ at Venice. This also includes Indian artists Shilpa Gupta, Soham Gupta and Gauri Gill, at the Arsenale and Giardini venues. Shilpa has engineered a new kinetic installation, a simple yet brilliant work.

The Golden Lion for the Best National Participation was won by Lithuania for its pavilion titled ‘Sun & Sea (Marina)’, created by artists Lina Lapelyte, Vaiva Grainyte and Rugile Barzdziukaite and curated by Lucia Pietroiusti. It was a conceptually simple project, a live time-bound performative participatory work. The Belgium pavilion was done by Jos de Gruyter and Harald Thys. They created a world of contemporary sculptures/installations. The Golden Lion for the Best Participant in ‘May You Live In Interesting Times’ went to the US-born Arthur Jafa; the Silver Lion was given to Cyprus-born Haris Epaminonda. The jury’s special mentions went to the Mexican artist Teresa Margolles and Nigerian Otobong Nkanga. The Golden Lion for Lifetime Achievement went to Jimmie Durham from the US.

The Indian pavilion returned after eight years. The works displayed were of artists Nandalal Bose, M.F. Husain, Rummana Hussain, Atul Dodiya, Shakuntala Kulkarni, Ashim Purkayastha, Jitish Kallat and G.R. Iranna. It was curated by Roobina Karode. The Indian pavilion was hosted by the government of India, ministry of culture, CII India, NGMA and art collector Kiran Nadar. I wish to see a permanent Indian pavilion designed for all the art and architecture biennales of Venice. I hope the government takes cognisance of this soon and gives autonomy to the commissioner and curator.

The incomparable Kiran Nadar made an exciting announcement in Venice: a new museum building to be built in Delhi, designed by the young and brilliant British architect Sir David Adjaye. He was selected by eminent jurors of the art world, such as Glenn D. Lowry and Chris Dercon. It was a year of Indian presence in Venice. The Kochi-Biennale Foundation announced the first edition of the Kochi-Muziris Biennale in 2011 in Venice. After eight years, the KBF announced artist and writer Shubigi Rao as the curator of KMB 2020. It was declared in Venice in the presence of patrons and friends of the biennale.