Bibek Debroy: Which state has most beggars, and how beggars differ from vagrants

In a written reply to a question in Parliament on March 10, Minister for Social Justice Thaawar Chand Gehlot gave us the number of beggars, aggregate and by state. The total number of beggars is 4,13,670—2,21,673 males and 1,91,997 females. Most beggars are in West Bengal, followed by Uttar Pradesh, Andhra Pradesh, Bihar, Madhya Pradesh and Rajasthan. Large states will have large populations. It is natural they will have large numbers of beggars, too. Therefore, one should make numbers comparable, by dividing the number of beggars by population of the state or Union territory. If that is done, most beggars are in West Bengal, followed by Assam. Least beggars are in the northeast (minus Assam), Tamil Nadu, Kerala and Himachal Pradesh. I do not know why these numbers were widely reported in the media. The figures are old, from Census 2011, and a similar question (with identical numbers reported) was answered in Parliament in February 2015.

But one must be careful. These census numbers are not for beggars; they are for beggars and vagrants. What is the difference? The word beggar does not figure in the Seventh Schedule of the Constitution, unless one has in mind “relief of the disabled and unemployable” figuring in the state list. Unlike ‘beggar’, ‘vagrant’ is mentioned in the Constitution. “Vagrancy, nomadic and migratory tribes” are mentioned in the concurrent list. That is the reason the census not only collects the number of beggars, but separately reports those who are disabled and vagrants. Instructions to the census enumerators say beggars and vagrants are those not engaged in any economically productive work. 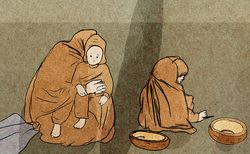 But how is a beggar different from a vagrant? Different states have different laws against begging. Most follow the Bombay Prevention of Begging Act, 1959, which does not mention vagrancy. As titles of the legislation suggest, Bengal Vagrancy Act and Cochin Vagrancy Act are on vagrancy. For West Bengal, “vagrant means a person found asking for alms in any public place, or wandering about or remaining in any public place in such condition or manner as makes it likely that such person exists by asking for alms but does not include a person collecting money or asking for food or gifts for a prescribed purpose.” Cochin has similar provisions.

Is a ‘vagrant’, therefore, a beggar who wanders around, with no fixed abode? Roots go back to English Poor Laws, such as England’s 1494 Vagabonds and Beggars Act. The implicit value judgment was that no able-bodied person should beg. Vagrants, equivalently vagabonds, were “sturdy beggars” and should be punished. Beggars were not sturdy, so to speak. They were sick, elderly and disabled, who would be given a licence to beg.

We have imported and implanted those Elizabethan (not even colonial) value judgments into the Constitution and even the Criminal Procedure Code. “People beg on the streets not because they wish to, but because they need to. Begging is their last resort to subsistence, they have no other means to survive. Begging is a symptom of a disease, of the fact that the person has fallen through the socially created net…. Criminalising begging is a wrong approach to deal with the underlying causes of the problem.” This quote is from a 2018 Delhi High Court judgment. Skills, social safety nets and empowerment—in Shakespearean times, or even that of Dickens, we would not have thought of these. We would have thought of workhouses. Government and civil society interventions have led to rehabilitation, and there are success stories.

Despite Covid-19, we are in the midst of the 2021 Census. I wonder what those numbers will be, for both beggars and vagrants.