All bees are not honeybees

How many bees are there in India? India has a human census and a livestock census, not a bee census. There are bees and bees. Some are solitary, others live in colonies. When we use the word bee, we normally mean honeybee, and solitary bees do not make honey.

Out of 20,000 species of bees, only eight are honeybees. The ones you are likely to encounter are Apis dorsata, Apis mellifera and Apis cerana. Apis dorsata is the wild bee. It cannot be domesticated through proper apiculture. When it stings, it hurts badly. These are the colonies we see hanging from trees and rocks. When we buy honey gathered from forests, that is likely to be Apis dorsata. Apis cerana is known as the eastern honeybee and a lot of bee farmers still use Apis cerana. In contrast, Apis mellifera is called the European or western honeybee. It is readily domesticated. It does not sting unless provoked and when it stings, it does not hurt badly. 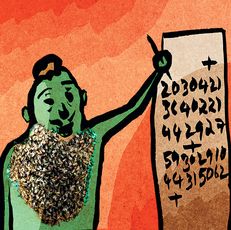 Let me quote a directive issued by the European Union in 2001. “For the purposes of this directive, honey is the natural sweet substance produced by Apis mellifera bees from the nectar of plants or from secretions of living parts of plants or excretions of plants-sucking insects on the living parts of plants, which the bees collect, transform by combining with specific substances of their own, deposit, dehydrate, store and leave in honeycombs to ripen and mature.”

Should this not be contested? How can honey be defined as that which only comes from mellifera? It is true that mellifera is easier to farm. It is also true that productivity is higher. But there cannot be a compulsion. Monoculture is bad for diversity. If you go to Nagaland, you will come across priceless honey produced by the stingless bee. (Kerala also has stingless bee honey.) If exported, the EU will not accept this as honey. There is a difference between hive and colony, though we often use the terms interchangeably. Hive is the structure, the home.

A colony consists of a queen, drones and female-worker bees. A bee-farmer may have an empty hive. We should ask him/her not about the number of hives he/she has, but about the number of colonies. How many bees are there in an average colony? This is impossible to answer.

Until we began to keep bees (not professionally, of course), I had not realised that bees control their population, depending on season and availability of flowers. Off-season, the number drops to 20,000. In-season, it shoots up to 80,000. This year, Covid-19 and lockdown disturbed spraying undertaken to control mosquitoes, and the number in our colony shot up to 2,00,000. (Spraying adversely affects bees. Plus, pollution was lower and there were more flowers.) We had to build another storey in our hive.

Thus, we cannot have a bee census. We can have a census of colonies. Some cross-country figures suggest India has 13 million colonies, the most in the world, followed by China, Turkey and Iran. India’s official figures suggest 3.4 million colonies, with a potential to increase to 200 million. The largest producers of honey are China, Turkey and Iran. Hence, (a) we do not firmly know how many colonies exist in India; (b) potential is far higher; (c) productivity levels of existing Indian colonies are low. Part of this is the familiar challenge of transiting from informal to formal, which extends also to marketing, branding and distribution issues. But Indian consumers, increasingly health-conscious, have started to consume more and more honey. Simultaneously, there is the phenomenon of adulteration of honey with sugar syrup, recently reported in papers.