The Union Budget is not meant to change indirect taxes. Indirect taxes are the Goods and Services Tax Council’s mandate. All indirect taxes are under the GST, barring five products—alcohol for human consumption (remains with state governments), petroleum products (to be integrated within the GST, but GST Council will decide when), tobacco (part of the GST, but the Union government can impose additional excise duty), entertainment tax (only those imposed by local bodies) and electrical energy.

When the GST was launched in July 2017, many people welcomed it and suggested it would lead to incremental GDP growth of 1.5 to 2 per cent. I have no idea where those figures originated and was castigated when I said this. The only estimate I know is the one done by the National Council of Applied Economic Research for the 13th Finance Commission. To quote from the commission’s report, “It (NCAER model) estimates that implementation of a comprehensive GST across goods and services will enhance the nation’s gross domestic product (GDP) by between 0.9 and 1.7 per cent.” Note this is after a complete and comprehensive GST, which is still a distant goal. GST is a work in progress. With 31 states and Union territories, as members of the GST Council (this has Goa, Puducherry and Jammu and Kashmir as one entity), it is bound to be messy. After all, other than Canada, Brazil and India, no other country has dual GST. Given our Constitution, GST had to be dual. 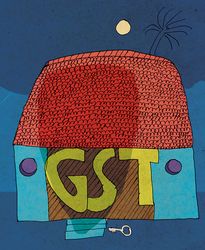 GST has made life simpler. Initial teething pains were partly because enterprises (and not just the government) were not prepared. The Empowered Committee was formed in 2000. The first discussion paper was in 2009. With this track record of discussion and debate, some people probably did not expect it to be actually implemented. We have now forgotten the estimated 17 taxes and 13 cesses/surcharges that have been subsumed and their cascading effects. When we complain about 12 forms, we forget that the pre-GST system had an estimated 495 forms/challans. We forget studies show average transportation cost and travel time have both declined by 20 per cent. Pre-GST, the average distance a truck travelled was 225km/day; now it is 300-325km/day. The average price has also declined for goods, except earlier consumers did not know what they paid. Taxes had a cascading impact. Indeed, in October 2016, the GST Council took a decision that for no item should tax incidence be higher than pre-GST. Prices of goods have declined, but prices of services have increased.

Any economist should argue for a single GST rate and will perhaps settle for three (merit, standard and luxury goods). Instead, we have nine rates (0 per cent, 0.25 per cent, 1 per cent, 1.5 per cent, 3 per cent, 5 per cent, 12 per cent, 18 per cent and 28 per cent). Such distinctions are too fine and can be misused. Guaranteed revenue compensation to states has ensured that a large number of items had to be moved to exempted category. In passing, changes in rates are too frequent. Should we have consensus that rates will only be changed once a year? The average revenue neutral GST rate (which ensures same indirect tax revenue) should have been at least 16 per cent, if not more. Instead, the average is 11.6 per cent. This is not sustainable, a point flagged at the 37th GST Council meeting. While 1.21 crore registered taxpayers and 39.54 crore returns make the mind boggle, there has been evasion (often using shell companies and fake invoices). Therefore, while rate determination is the right of the GST Council, do read paragraphs 131 to 134 of the finance minister’s budget speech on GST administration, compliance and enforcement. “A system of cash rewards is envisaged to incentivise customers to seek invoice,” said Nirmala Sitharaman. Indeed, customers who do not ask for invoices are equally culpable in contributing to evasion. As enforcement is tightened, expect more complaints about GST.