Many people have written about Mahatma Gandhi and Babasaheb Ambedkar and their contrasting views on assorted subjects—but not on a mundane a topic like fountain pens.

Limited edition fountain pens can be expensive and are never an average indicator. There are lists of the most expensive pens in the world and, in those, the dividing line between a fountain-pen and an item of jewellery gets blurred. But across lists, among manufacturers of most expensive fountain-pens in the world, there will be Mont Blanc, Caran d’Ache and Aurora. Indeed, the average Mont Blanc fountain-pen is expensive, and limited editions more so. In 2009, there was a controversy over the Mont Blanc Mahatma Gandhi Limited pens, and there was a case in the Kerala High Court, too. There were two editions: the 3,000 with 3,000 fountain pens and 3,000 roller balls, and the limited edition 241 (241 miles for the Salt March) with 241 fountain pens. The fountain pens had the image of Gandhi engraved on the nib. Apart from violation of Emblems and Names (Prevention of Improper Use) Act of 1950, restricting the use of the name or pictorial representation of Gandhi, it was a bad idea to link his name with pens that cost several lakhs of rupees. 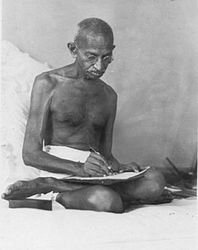 It is not only a question of price. There is incongruity in linking Gandhiji’s name with fountain pens, regardless of price. Gandhi did not like fountain pens. He preferred reed pens, those used before the advent of fountain pens, where the pen had to be dipped in an ink pot. This comes across in several of his letters. In April 1947, he advised students, “Learn to do with a pen-holder and ink costing two annas, instead of a fountain pen costing Rs50.” Why was Gandhi against fountain pens? That had to do with his ideal of a self-sufficient village economy. It was not entirely about the self-sufficient village economy, though. There was a touch of swadeshi, too. We do not have official price indices that go as far back as 1947. Hence, roughly, when he said Rs50, he was talking about fountain pens with price tags of around Rs15,000 today. These were imported pens and expensive. Though Gandhiji did not like fountain pens, he did possess them. One of these was gifted by K.V. Ratnam of Ratnam Fountain Pen Works, Rajahmundry, Andhra Pradesh. Ratnam Fountain Pen Works has the distinction of producing the first fountain pen made in India in 1932 (not the one gifted to Gandhiji).

The Poona Pact was signed in September 1932. Among the signatories were Ambedkar and C. Rajagopalachari. After signing, Rajagopalachari and Ambedkar exchanged their fountain pens. Ambedkar was fond of large fountain pens—Parker, Sheaffer and Waterman—imported by Thacker and Company. One cannot visualise Ambedkar without a fountain pen. What if it had been Gandhiji instead of Rajaji? Imagine Gandhiji exchanging his reed-pen for Ambedkar’s Waterman, a vivid contrast between village economy and modernisation. As importers turned manufacturers, there was a swadeshi fountain pen industry—in the west, east and south. For instance, the Sanghvi brothers made the Wilson pen used to draft the Constitution. There were foreign collaborations and some manufacturers focused on supplies for foreign brands. Think of Kim pens, Krishna pens or Kriptok pens in Kozhikode. Why did such Indian brands take a hit? Ball-point pens, FERA-triggered exit of foreign companies in the 1970s and Chinese competition since the 1980s.