The rise of Arvind Kejriwal

The unprecedented media interest in Delhi’s local elections can only partly be explained by the north-centric bias of major newsrooms. The other big reason for the disproportionate curiosity it generated is the interest in Arvind Kejriwal—and this is true well beyond the borders of the capital.

Even the most avid supporters of Prime Minister Narendra Modi want an effective national opposition. And, the continuous vacating of that place by the Congress has led to intense debate over who else may take that spot.

There have been other contenders—Mamata Banerjee’s expansionist experiment in Goa, K. Chandrashekar Rao aiming for national attention, to name a couple. But, perhaps, because of the anti-corruption movement that birthed the Aam Aadmi Party, none of them have the pan-India recall that Kejriwal does. The Delhi chief minister does not have the political cadre that a national party needs, but he has the brand positioning to build on. 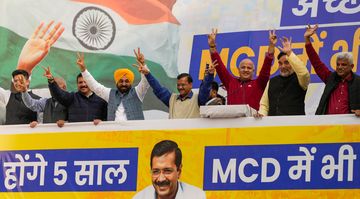 And, above all, perhaps more than any other party among the non-BJP players, he is deft enough to borrow from the BJP’s own playbook when needed.

The AAP had a few nervous moments as the results poured in, but was eventually able to break the BJP’s 15-year grip on Delhi’s corporation. The victory—though not as large as forecast by the exit polls—was no less significant when you consider how much energy the BJP invested in the election, bringing out a slew of chief ministers and Union ministers. The AAP has wrested the verdict from the BJP against the backdrop of a barrage of corruption allegations, CBI raids on the deputy chief minister and leaked videos of AAP’s Satyendar Jain getting preferential treatment inside prison. For a party that is still just 10 years old, this is no slight feat. It is, as Kejriwal pointed out in an address to workers after the result, the party’s fourth electoral victory in the capital. Juxtapose this with the BJP that has not been able to win the assembly since 1998. And now has lost control of the civic administration as well.

If Kejriwal is able to take over 6 per cent of the vote in Gujarat—and this appears to be a sure shot—the Aam Aadmi Party, officially, becomes a national party. If it breaches 15 per cent to 20 per cent, not many can deny the primacy of Kejriwal in the opposition pantheon. What will be closely observed is its comparative performance with the Congress, especially after its success in displacing the Congress vote in both Punjab and Delhi.

As the AAP increases its footprint, Kejriwal’s party will perhaps have to find greater clarity on issues of ideology and policy. Its ambivalence has stood it in good stead—politically and electorally. But as it officially enters the national arena, more and more people will want to know Kejriwal better.

Till then, love him or hate him—the opposition and the ruling party can no longer ignore him.