India should get off the Ukraine tightrope, writes Barkha Dutt

If Putin gets away with this, who is to say China will not try the same?

All the points about western hypocrisy are true. As are, what veteran diplomat Vivek Katju has called, “India’s cruel dilemmas” when it comes to being able to take an unambiguous position on Russia’s invasion of Ukraine.

But there comes a time in the life of nations, especially those who see ourselves as global players with a moral force, that walking a precarious tightrope appears timid more than thought-through.

India’s response to Vladimir Putin’s unilateral act of aggression against Ukraine may have evolved in shades and hues, more critical today than at the start. But as Russian shelling kills Naveen Shekharappa, a young Indian student, all of 21, the war has come home. Looking at images of his distraught father—who reminded us that even with a high 97 per cent score his son could not get admission to a medical college at home—there comes the reminder that in an increasingly globalised, interdependent world, conflicts do not take place in distant lands any more.

So, yes, the Americans and the Europeans have been transactional and self-serving. And yes, they have not stood steadfast by the side of India when the Chinese or the Pakistanis have intruded into our territory and sought to undermine our territorial integrity. And yes, the Americans invaded Iraq on the back of dodgy, questionable claims of weapons of mass destruction. And wrote the playbook on ‘military action for regime change’. 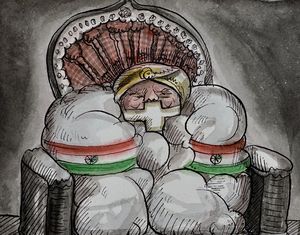 But the enumeration of these examples does not really tell us why India abstained from a vote calling for an emergency session of the United Nations General Assembly. Especially when the previous vote at the Security Council was redundant, given Russia’s automatic veto.

The attempt by the UN to call for a ceasefire during the 1971 war between India and Pakistan has been cited as an example of the sort of necessary relativism that makes one country’s ingress another nation’s freedom movement. But surely we cannot benchmark Putin’s wilful destabilisation of the world with the genocidal killings of the Bengali population in 1971 that eventually gave birth to Bangladesh—with India’s military support. That Putin’s troops have taken the conflict beyond the separatist regions that he initially recognised as independent, too, speaks for itself.

There has also been the suggestion that India has to tread carefully because it does not want a Russia-China axis to solidify if Delhi were to more openly back the other side. But has that ship not already sailed? In fact, China will watch this space with some interest. If Putin is able to get away with his audacious intervention inside Ukraine, who is to say China will not try the same with Taiwan next? The world would have shown that it will look the other way; Beijing will be the biggest beneficiary.

With Putin marching deeper into Ukraine, India should get off the trapeze and take a stand.