The vaccine wars have reached a tenuous truce, with both Serum Institute of India and Bharat Biotech issuing a joint statement of unity around “saving lives”. This, obviously on orders from probably the highest levels of government, came after the damage was done. For anti-vaxxers, rumour-mongers and conspiracy theorists, this week offered the perfect opportunity to bash science. And this was the real tragedy.

Ordinary Indians, already terrified by the year they have had to go through because of the pandemic and the lockdown, really do not understand the difference between efficacy and immunogenicity. Not too many even know that in peace-time it would take a year to test the efficacy of a vaccine. And what this is simply measuring is the odds of getting reinfected. Since a year’s luxury is not available to any country in the world, scientists have to deal with other parameters, in which testing for safety is paramount. I would not have known any of this had I not spent an obsessive year reporting on Covid-19 and its aftermath.

And, that is the point. On the day the drugs controller general of India officially greenlit the vaccines, he did not take questions from reporters. The insistence on a monologue as communication at this critical and sensitive point created a massive information vacuum which was then filled by quarrels among scientists, experts and the two vaccine manufacturers. The result is that people are besieged with doubts, some valid and some hysterical. 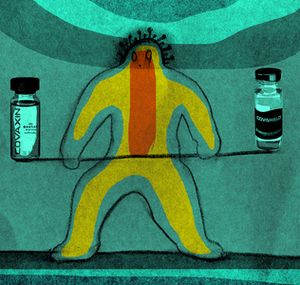 Experts like Dr Shahid Jameel told me that instead of the opacity that accompanied the announcement and what followed—thereby undermining the legitimate gains made by scientists—the alternative should have been not just to answer questions, but to broadcast live the meetings of the SEC (subject expert committee) to create confidence and comfort among citizens. In this, he says, we must borrow from the American example in transparency and the public’s right to access information.

India makes 60 per cent of the world’s vaccines, and companies like Bharat Biotech and Serum Institute are not newbies. Both have a proven scientific track record. Nor is raising questions and demanding to know more any sort of disrespect to India’s homegrown scientists. The worry, for most people, is that the pressure to be “atmanirbhar” when it comes to a Covid-19 vaccine should not lead to decisions taken in haste or approvals that cut corners.

Since the controversy erupted, several scientists with unimpeachable integrity have explained to me that the efficacy numbers that are available now could well alter over a period of time, as these numbers have not been studied in any trial for the length of a full year.

The government should be holding daily press briefings and running 101 sessions on the vaccine rollout. There should be digital and offline interfaces for people to post their questions. And, there should be much greater transparency and insights into the decision-making process as well as how the trials are being conducted.

Dr Jameel suggests that the best way for Indians to believe that both vaccines are safe for use is for officialdom to lead by example. Let top ministers and bureaucrats of the government take the vaccines and demonstrate their own confidence and trust in the systems that have been used to grant the approval.

In the cacophony, that may be the best way to salvage science.