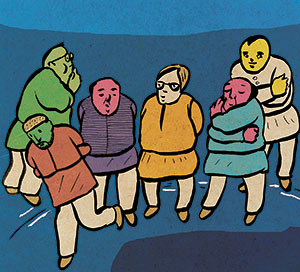 Despite the shades of Pennsylvania in Patna—the late count, the allegation of malpractice, the neck and neck race, and the suspense—Bihar finally has a new government.

And the quick short political bullet point is this: Narendra Modi is a Teflon prime minister who can still tip any election.

The two big winners of this election are Modi and the 31-year-old who was hoping to become India’s youngest chief minister. Despite a spirited challenge by Tejashwi Yadav, who fought not just an energetic but a responsible campaign focused on economy, jobs and performance, the groundswell of anger against Nitish Kumar did not stick to his alliance partner, the BJP.

On the ground, in interviews, voters explained this by saying that Nitish Kumar ran a one-man government, and so he was alone responsible for the poor handling of the migrant crisis and the pandemic as well as the flagging economy.

But in truth, the BJP was able to show Nitish Kumar his place. The gamble with Lok Janshakti Party’s Chirag Paswan, who broke away from the National Democratic Alliance and threatened to send the chief minister to jail, was seen as a carefully calibrated project to cut into the vote share of the Janata Dal (United). He set himself up to be the prime minister’s Hanuman and repeatedly spoke of a BJP-LJP government in the state. His game worked. Stung by the results, Nitish Kumar’s party colleagues have been lamenting the consequence of the “chirag (flame)”that burnt “Ayodhya instead of Lanka.”

While Nitish Kumar will be chief minister again, it is evident that this win has been delivered to him by the prime minister. You can expect him to be a paler, blander, more diminished version of himself than we have seen even thus far. And there are legitimate questions over how long this alliance with the BJP will sustain. Probably, the calculation that Nitish is ever ready to switch sides and that Bihar should not throw up a surprise as Maharashtra did (when the Shiv Sena, the NCP and the Congress came together) will ensure that the BJP does not rock the boat for now. But the power dynamic in the relationship has permanently altered.

The other big takeaway is the fall of the Congress that has clearly dragged the Mahagathbandhan down. While in sheer numbers, the staggering improvement of the left was able to compensate for the drop in the Congress, but the fact that Bihar’s Muslim voters chose to give five seats to Asaduddin Owaisi’s party says something significant. The Congress is foolishly lashing out at Owaisi for splitting what it calls the “secular vote”. Instead, it needs to reflect on the reality that increasingly it is no longer seen as a winning party. The image of Rahul Gandhi taking a brief vacation in the middle of the Bihar campaign captures both the entitlement and the denial of the Congress.

The Bihar verdict is yet another jolt for India’s opposition parties. The BJP juggernaut cannot be halted by last minute eruptions of energy. If anything, it is a reminder that politics is a 24x7 commitment. You have to live and breathe it, if you are to survive it in an India whose centre has pivoted right.