India’s television news is in meltdown. Channels are fighting among themselves. The relationship between television hosts is as volatile as that between India and Pakistan. And the audience is sniggering at the circus, where the media itself has become the main entertainer. I joked the other day to the razor-sharp stand-up comedian Anuvab Pal that his job was in danger. Prime time anchors, I warned him, might be funnier than he is—and without even intending to be.

Then I amended my words. The difference, I said, self-correcting, is that the news hosts are both funny and dangerous, whereas satirists were benign, if occasionally acerbic.

As TV news becomes a caricature of itself, it has also played to the basest prejudices a society can have; loose talk, instant judgment, slander of women, anti-Muslim rhetoric—everything that good journalism once rose up against has been normalised and made mainstream by television now.

The navel-gazing quarrel over who is worse on the spectrum of options is one more excuse for the TV media to not to its job. First, the tragic death of actor Sushant Singh Rajput was the perfect excuse to not report on the Covid-19 pandemic, the threat from China or the state of the economy. Now the tamasha has been overtaken by the state of play within the media industry. Channels that were till yesterday just as irresponsible and inflammatory in their coverage of the Rajput case and the misogynistic coverage of his girlfriend, Rhea Chakraborty, are today acting sanctimonious. 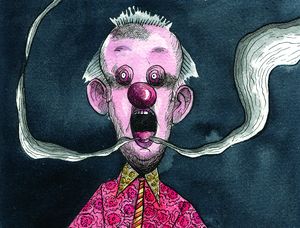 The worst are the networks which play on the formula of yin and yang. In an effort to keep all sorts of audiences on their side, some of their presenters are voluble, gossipy, aggressive and downright irresponsible. Then they have another set who are projected as more rooted and responsible. This way they get to run with the hares and hunt with the hounds, and seek to be all things to all people. Frankly, this last category is the most disingenuous; at least with the others you know precisely what you have signed up for.

The serious impact of all this is, of course, the death of credibility. When journalists become the subject of memes and mockery, what you have is a weakened and divided fourth estate. And guess who that leaves with the last laugh—India’s politicians. Journalism was meant to hold the powerful to account. But if the media is so busy bickering, sniggering and pulling down its own, it is hardly in a position to take a united stand on anything.

Television anchors, with delusions of grandeur, may believe that being on air every night offers them some sort of immunity. But now that a furious debate has erupted over how news ratings are measured and how easily they can be manipulated, channels cannot even hide their venom behind the boastful claims of numbers.

No matter which way you look at it, perhaps not since its inception has television news been this disrespected and irrelevant.

As a former practitioner of TV, I wish I could seek comfort in an “I told you so” moment.

But a weakened media is terrible news for democracy.