Barring the work of a few good men who did their job bravely, the complicity of the police in the Delhi riots is now clear. Muslim and Hindu victims that I have met in the riot-torn areas of the northeast part of the capital say the same thing: SOS calls were handled insensitively or ignored altogether. Ineptitude and callousness are bad enough, but in this case the police—or sections of it—have quite clearly shown a brazen sectarian bias against the riot-affected Muslim. There are videos that have caught the police on camera joining hindutva mobs in pelting stones or leading the charge against Muslim neighbourhoods. The most damning evidence of police complicity has been the video that captures cops beating four injured Muslim men, lying on the road, pleading for mercy. They hit the men and force them to sing national songs. One of the young men, Faizan, who was only 23, has died. Another, Kausar Ali, is battling for his life in the hospital. In both cases, the families have detailed shocking allegations of police brutality and callousness. The other two men in the video are so terrified after the police assault that they have refused to talk to the media. 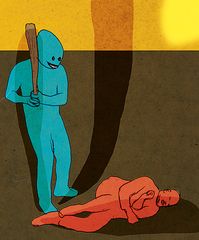 The picture now emerging from the Delhi riots is very different from what we believed in the first 24 hours. At the time, the violence was presented as a manifestation of ‘clashes’between two ideological groups, one opposing the citizenship legislation and the other supporting it. Extensive ground reporting over a week has convinced me of one thing: there was absolutely nothing spontaneous about the riots. Nor were these outbursts of rage between local communities. In every neighbourhood I have visited, the riot victims have said the same thing—that they did not recognise a single face in the rampaging mob. In other words, the rioters were from outside—outside of their colonies and maybe even the city. At last count, apart from the nearly 50 people who are now dead, there are 70 people with gunshot wounds in hospitals. How do we explain the sudden buildup of arms in the capital?

In area after area, neighbour has come to neighbour’s help. Hindus I have met have risked their lives to save Muslim friends. Muslims have formed human chains around temples to protect them. There is absolutely no suggestion that there was a growing divide within people, even over the citizenship legislation debate. The violence has evidently been organised and engineered.

What is worse is the lack of empathy in the aftermath. The most noticeable thing on the ground is the missing politician. I did not meet a single politician in the hospitals, at the mortuaries or at places of worship. Neither parliamentarians nor legislators have bothered to be present in the neighbourhoods that voted for them. You would imagine that this was a moment for politicians genuinely engaged in public service to park themselves by the side of the people.

Instead, across North East Delhi, it is activists and citizens groups that are working morning to night to help people. We forget that most of the riot victims are extremely poor. They do not even have the wherewithal to organise the 0800 that an ambulance ferry could cost. You would think by now logistical issues like these would be addressed by government-run relief centres. But all of this is missing.

The riot victims of Delhi have been orphaned.