Anuja Chauhan on nudes and their meaning

Why exactly has Ranveer Singh shed all his clothes, slicked himself with oil, and lain himself down into that curiously defenceless, needy, side-sprawl upon a Turkish rug for Paper magazine? It can’t be for media attention—because he gets enough of that already. It can’t be for money (though maybe that pricey sea-facing quadraplex in Bandra took the shirt of his back). It isn’t for PETA or any other ‘good cause’, which is usually the ‘reason’ most male celebrities give to justify their risque photo-shoots. It just is. Take it or leave it (Um, lawsuits about hurting female sentiments and outraging female modesty be damned, most girls and women are happy to take it.)

As a performer and as a personality, Ranveer is known to push the envelope. He does so with focussed, almost messianic zeal—as though it were his self-appointed moral duty to bring light and airiness to a stodgy, atrophied society. To release that which is repressed, to express that which is suppressed, to subvert that which is pompously inflated. And so, to a society fed on rigid, macho images of masculinity—clenched jaws, flexed torsos, shoulders, chest, back, arms, and abs—Ranveer blithely offers a fluidly curving butt cheek, a length of hairy thigh and calf, bare feet, relaxed body langauge, and soft, vulnerable eyes. 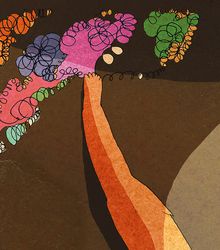 Paper magazine has positioned his nudes as a tribute to Burt Reynolds’s famous 1972 centrefold in Cosmopolitan magazine, but to me, that soft curve of side-butt is more reminiscent of an earlier era—John Lennon’s iconic cover for Rolling Stone magazine, shot by Anne Liebovitz, where he posed naked in a foetal position next to a fully-clothed Yoko Ono, on the day that he was assassinated.

Over the years many powerful, subversive statements have been made by artists as varying as Lady Gaga and Shakti Kapoor with their bodies—about objectification, the media circus and the male gaze.

Sometimes the nudity is a slutwalk style act of defiance against societal norms. Sometimes, as in the case of several female celebrities who share non-photoshooped nude images of their pregnant and postpartum bodies, it can be an act of self-affirmation, done for the exquisite relief that comes with baring and even celebrating ones flaws with others in the same position as themselves.

Sometimes, in the case of top Olympians and athletes, it is about celebrating and strutting the hard work and sacrifice they have put into their bodies.

At times—like when the mothers of Manipur demonstrated naked with a banner that said, ‘Indian Army rape us’—it is a political statement. (Hmm, is Ranveer turning around, pulling down his pants, and irreverently mooning our solemn Hindu Rashtra?)

Sometimes it is about becoming entirely defenseless and allowing total access, by removing the last and final barrier between viewer and viewee, and proving you love your audience as much as they love you.

Naturists—the folks who used to be called nudists in less politically correct times—believe that casual, everyday nudity helps people shed their inhibitions and hang-ups—and cultivate a healthy attitude to the environment, the planet and sex.

With Ranveer, I suspect it’s a case of pretty much all-of-the-above.

See, in the final analysis, nudity is not really as much about titillation as it is about power. Both the beggar on the roadside and the supermodel on the catwalk can be described as bhoonkha-nanga (starving-naked). But one of them has power and one does not.

Here, Ranveer surrenders his (considerable) power and makes a present of it to the viewer. Good for him.

And as far as my female sentiments go, what’s hurting them is not #ranveernudepics but the fact that he consistently gets paid more than his equally talented wife. How about filing a case against that?