I remember meeting Pakistani music artist Ali Zafar about ten years ago, and being utterly scandalised when he breezily confided that, ‘best way is to endorse Pepsi for one year, then Coca Cola for the next year. Keep everybody happy, including yourself.’ Being a trench fighter in the cola wars of the 1990s and early 2000s, I was naive enough to expect brand loyalty from brand endorsers.

In those decades, Pepsi was synonymous with Shah Rukh Khan, ThumsUp with Salman, and Coke with Aamir. When I went out to shoot my Pepsi ads with SRK, Saif Ali Khan, Amitabh Bachchan, several leading ladies, and most of India’s leading cricketers, I used to feel like a righteous Jedi locked in a holy war against the forces of the Dark.

Today of course, things have gotten so surreal that they make me feel like I’m stuck in the Upside Down from Stranger Things. Shah Rukh, in a makeover reminiscent of a teenage pop princess turning badass twerker, has gone from squeaky clean boy-next-door to snarly, smirky ThumsUp chugging ‘man.’ Salman, meanwhile, has surrendered the ‘grow-up to ThumsUp’ space to become a sort of weird, eternal man—child who drinks Pepsi and avoids matrimony.

Some Cola endorsers have given up on the category itself. In 2014, speaking at IIM Ahmedabad, Bachchan claimed to have stopped endorsing Pepsi because a young girl in Jaipur ‘called it poison, and that troubled him’. PepsiCo was mystified by this statement as his contract with them had come to its natural conclusion several years ago. Perhaps it was a case of you-didn’t-dump-me-I-dumped-you. Who knows? 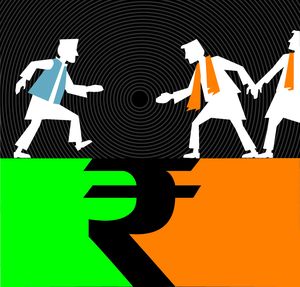 Putting aside colas, but sticking with the ethics of brand endorsements, we come to the curious case of Akshay Kumar and Vimal Elaichi. I am not very sure why the brand’s marketers added yet another endorser to perform that weird two fingered aadab along with Ajay Devgn and Shah Rukh (surely it hints at the fact that star power doesn’t translate into wins for the brand?) But in their wisdom they went ahead and signed Akshay. He immediately faced a backlash for surrogate-advertising tobacco, apologised to his fans, said he would donate his entire endorsement fee to ‘a worthy cause’—but added that the ads featuring him would continue to run for the entire endorsement term. Which kind of defeats the purpose of not using his fame to influence young minds into trying out unhealthy, cancer-causing products. Oh, and by the way, we are still waiting to hear what the ‘worthy cause’ is.

So does such fickle brand-hopping affect a star’s popularity?

The simple answer is no—on the contrary, in today’s cynical world, stars are openly admired for ‘scamming the system’, for being savvy enough to play both sides, for having their cake and eating it, too. The person for whom respect is lost (in the long run) is for the brand that is desperate enough to still hanker after these star associations. A point that needs to be pondered by Cola and gutkha brands, but more importantly, by political parties today. The more MPs and MLAs jump ship from hither to thither in the full blaze of the media spotlight, the more reluctant admiration the voter will have for their rockstar-ishness, and the lesser they will respect the parties that are falling all over themselves to pander to them thus.

If a party wants to retain the voter’s respect, it should respect its loyal cadres, reward them with plum posts so that they do not get disgruntled, and focus on being true to its core values.

Otherwise our political system will collapse into a space where party names and symbols are redundant—a churning mosh-pit of greedy petulant rockstars and their hustlers, all jumping up and down demanding treats, and achieving for the nation, nothing at all.