These haters have no issues with the likes of ‘The Kashmir Files’, ‘Kabir Singh’

Slightly bemused with the amount of hate Zoya Akhtar’s teaser for the Netflix films, The Archies, has been getting. I found it, to use my daughter’s phrase, ‘nice only’. As in, so many meticulously styled, impossibly beautiful young things, bathed in vintage-y Instagram filters—each one placed into the aesthetic frames as carefully as a pastry chef places marzipan roses onto a three layered wedding cake—and going forth (presumably) to do the things kids did in the 1960s—attend school, obsess over crushes, eat ice-cream, play music, ‘go steady’, picnic, and perhaps solve a crime.

Lots apparently. Comments range from they look too fake, too rich, too fair, too westernised, to ‘they don’t look like the Archies I read and loved’, to ‘I hate the Archies, they gave me an inferiority complex when I was a child’, ‘why can’t some Indian comics Like Doga or Amar Chitra Katha be adapted instead’, to ‘Oh God, not that ancient poor-good-Betty verses rich-evil-Veronica trope again’, to the inevitable rants against privilege and nepotism. 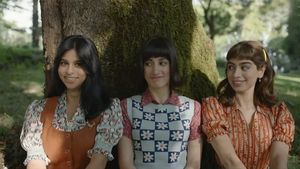 A still from Zoya Akhtar’s The Archies

Personally, I think that somebody at Netflix has been very savvy. They’ve managed to draw up a Venn diagram that includes almost every age-group and socio-economic category. All Zoya Akhtar fans, plus old folks around the world who read and loved the Archies growing up, plus old desis who are Amitabh Bachchan/Sridevi/Shah Rukh Khan fans and are curious to see how their next-gen turned out, plus young desi kids who follow these star-kids on social media, plus indie music fans who would love Gully Boy and Dots music, plus young kids around the globe who’re drawn in by the slick, international styling of the show. It’s really quite a coup.

On top of that, they’ve dodged all accusations of being trope-y and repetitive because they’re cleverly serving us old wine in an old bottle only. We can’t complain that The Archies is a Kuch Kuch Hota Hai rip-off because um...Kuch Kuch Hota Hai was an Archies ripoff, complete with Anupam Kher as Mr Weatherbee.

From Tina and Anjali warring over Rahul then, to Rajkumari Indumati and Chutki fighting over Chota Bheem even today, a bajillion Bettys and Veronicas compete for a bajillion Archies in our movies on a regular basis.

The people objecting to the film are the people who’ve had absolutely no issues with biased content like The Kashmir Files or toxic fare like Kabir Singh—or the about-to-be-released Prithviraj, which features Akshay Kumar, 54, playing a boy-king in his early twenties, romancing an actress who is 30 years his junior. Which honestly to me is far more problematic than Suhana Khan deciding to follow her (self-made) father into his profession.

The most ironic bit is that The Archies is being trolled—both by the right-wingers and the woke youth brigade—for being ‘fake’ and ‘unrelatable’. The film does not reflect the reality of India, and the kids in it are some kind of self-centered la-la-landers who aren’t concerned or affected by the problems that plague Indian society. To which I would say:

2.) Aren’t our political masters always telling protesting teenagers ‘don’t get side-lined by all this activism-shactivism and politics-wolitics! A dutiful, patriotic child is one who goes to school, keeps his head down and his nose clean.

Which is exactly what the kids in the show are doing! I’m in awe of their noses actually—so chiseled and clean—not a blackhead or a visible pore in sight.