Beneath India Gate is the primest, sweetest spot our martyrs deserve: Anuja Chauhan

So, the Amar Jawan Jyoti flame no longer burns beneath the India Gate in what is unarguably the heart of the heart of Lutyens’ Delhi. The stark, evocative memorial—four flames leaping around the rifle and helmet of the unknown soldier—had been a place of succour and pilgrimage for the families and comrades of our martyrs for five decades, a destination for all visiting heads of state, the location of many civil society protests, including the Nirbhaya rape case, as well as the setting of iconic love ballads to the nation like ‘Masti Ki Pathshala’ from 2006’s angsty, stirringly patriotic Rang De Basanti, a film btw, that would never find financing or a censor certificate today.

Spokespersons of the current dispensation have been calling the Amar Jawan Jyoti ‘makeshift’ and ‘cheap’ and hailing the new arrangement as ‘grand’ and ‘worthy’. Let us put aside the quibble that nothing could be more cheap or makeshift than a hologram projection of a statue of a major national hero on his 125th birth anniversary and focus on the fact that this argument seems vaguely reminiscent of the glib lines trotted out by corporates who grab prime land from under the feet of slum dwellers in return for pukka housing elsewhere. 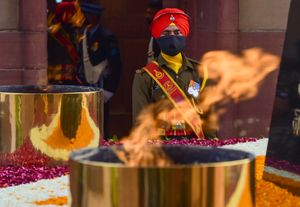 To anybody who thinks the defence services are not being short-changed, and that the National War Memorial is only 400 metres away, I would say, umm, remember when you were a child and in a group dance? You knew, in your bones, which position was front and centre. You were bursting with pride if you were occupying it, and if you were not, you were drawing comfort from the fact that you were just two places away from it, or just behind it, and dying of mortification if you were tucked into a corner, almost out of sight.

What I find utterly bewildering is the fact that the India Gate is a war memorial anyway—an iconic, globally renowned one in fact, so why not just construct concentric circles around it, and low walls to engrave more names and more wars instead of building a whole new memorial and starting a whole new flame just a little distance away? The whole thing baffles logic.

The services have kept a more or less stiff upper lip about the whole business like they’ve been doing about the state of their weaponry, kits, pensions, privileges, and the ban on foreign-made-Indian liquor in the Army canteens. This is the price one pays for being at the receiving end of toxic patriotism—which places soldiers on pedestals so they can never do anything as human as object or protest.

Chalo, at least the entire transfer was handled admirably. The tame media was tutored to emphasise, repeatedly and soothingly, that the eternal flame had been ‘merged, not extinguished’ and the PM, his joint chief, and the three chiefs of staff all showed up and saluted with grave reverence as the ‘shifting’ was done. The opposition, if there was any from the families of martyrs whose faith and deeply felt beliefs dictated that the current location was the correct one, was quickly suppressed.

What a pity that all this reasonable thinking, practicality, understanding, and full-on government backing is never demonstrated when the matter of the statue of Ram Lalla crops up. Just think, perhaps it could have been shifted about just a wee bit to a more consensual location in just such a respectful, reverential government-supervised way.