Why exactly is this BJP gent what’s-his-name so triggered by Sabyasachi’s mangalsutra ad? To me, the controversial image on the designer’s Instagram—of a kohl-eyed, caramel-complexioned Indian woman, with a mangalsutra dangling upon her ample, black-bra-encased bosom—is one that I have seen about a bajillion times in my life. I have been squished against mangalsutra-festooned bosoms like that on the Delhi metro, I’ve wept against them at funerals, that same familiar topography has peeped out at me from behind computer keyboards and sewing machines and mehendi cones, versions of that woman nurse babies, sell second-hand books, or fan the coals under corn-cobs in busy markets all over India on a daily basis.

She is a regular desi married lady, caught at a time of day when she is relaxing and perhaps feeling a little sexy, posed along with her legally wedded husband. Why is she now, suddenly obscene? And threatening? And un-Hindu?

What are the objectors objecting to exactly? 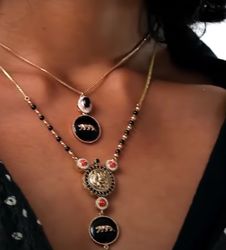 The fact that she is blatantly brown? Or undeniably large? Not westernised looking—thin, fair, quasi-Caucasian, and therefore, reassuringly othered?

Is the problem that she could be your wife, your mother, your sister, your colleague?

In which case is it not good that she’s proudly flaunting one of the symbols of matrimony, a bona-fide suhaag ki nishaani (marital symbol), made famous by Bollywood, along with the do-chukti sindoor (two pinches of vermillion), the red and white chooda (bangles), the green glass bangles? Or even the Winona Forever tattoo that Johnny Depp got when he was engaged to Winona Ryder (and had to philosophically correct to Wino Forever when they broke up?) You know, the good stuff, that feminists froth against, saying women should not be made to wear dog-tags that set them apart as ‘snagged,’ 'taken’, ‘property of so-and-so’, a black and gold beaded sign that reads ‘sold’ in every one of our 22 national languages?

Surely then, the lady in the Sabyasachi ad is a good Hindu lady?

Unlike say, me. I do have a mangalsutra—placed right reverentially around my neck by my Roman Catholic husband during our Arya-Samaji marriage ceremony. But I do not wear it, or the wedding ring he placed upon my finger during the church ceremony the next day either, citing the ‘sold’ sticker metaphor. (My husband says this metaphor is rubbish. He has worn his ring for 27 years and never taken it off. I tell him that maybe he keeps forgetting that he is married and so he needs a ring to remind him, but I do not, because I remember.)

So why are the right-wingers upset with this good Hindu lady, who unlike snarky feminists like me, is so out and proud about her mangalsutra? They should be lauding the international mainstreaming and celebration of such an image!

I think the problem with the lady in the ad is not her mangalsutra or her bra or her oomphy caramel flesh, but the fact that she has got that famous Sabyasachi gaze going on. She is looking right into camera, and calmly owning the fact that ya, once she is done nursing babies or selling corncob or typing up the boss’s reports, she is a sexual being, deserving of desire, and satisfaction, somebody with a brain, and with agency, somebody with the right to withhold or grant consent upon the marital bed.

This is what is getting the right wingers’ knickers into a twist. The blurring of good girl/bad girl, of mangalsutra/Kamasutra, of homely traditional girl/chaalu modern girl, the acknowledgement of the fact that every woman is both.

Because once the traditional everywoman is allowed to look, with that direct, untroubled gaze into a major designer’s camera, and to have desires, and a voice, and upward mobility, then all hell will break lose.