Neeraj Chopra proves Hindu men are as alpha as men from others faiths: Anuja Chauhan

The diminutive Pritam steadfastly replies that he will say it if his heart feels like saying it, but nobody can make him say it forcibly.

Which makes uncleji puff up with outrage and accusingly bellow ‘Hawwwww! Jihadeeee! Boooooo! Jihadeee!’ in a manner which is so reminiscent of a kindergarten playground that it actually makes you laugh.

Except that uncleji is standing at the head of a violent, two-hundred strong crowd, which had spent the day raising hateful, anti-Muslim slogans, at New Delhi’s Jantar Mantar, totally unmindful of all Covid-19 guidelines with their faces as flagrantly unmasked as their hate.

Kudos to Pritam for guarding the LoC of democracy so doggedly. If Chief Minister Arvind Kejriwal had had the integrity to give a similar reply when asked to recite the Hanuman Chalisa one-and-a-half year ago, perhaps his city-state would not be in such a sorry state today.

Hanuman Chalisa, Vande Matram, Bharat Mata ki Jai, Jai Shri Ram, even the national anthem, the list of mandated mantras one has to chant and stand up for is bloating by the day in these days of warped, toxic pseudo-patriotism. The loony fringe has gone mainstream, and this latest loony uncleji, with his more-than-passing resemblance to R.K. Laxman’s common man, symbolises the situation perfectly.

Btw, uncleji and his merry mob were out there agitating for a uniform civil code and the population control bill—because they have been brainwashed into believing that there is an army of macho Muslim alphas running amuck, love-jihading and procreating like crazy, all in a bid to boot effete Hindu men out of home and hearth. 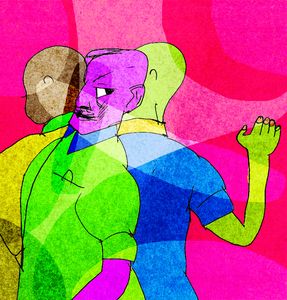 If I was a Hindu man, I would honestly be offended. Because hello, Hindu men are as alpha as men from any other faith. Look at Prithviraj Kapoor, spawner of a gorgeous dynasty! Look at Dara Singh, surely the machoest of them all! Look at Dharmendra Deol, arguably the best-looking man India has ever produced, father of six and husband of two (one of them a sitting BJP MP.) And look at Neeraj Chopra, the god-like golden boy we are all currently celebrating!

See, any demographic expert will tell you that population explosion is really not an issue anymore. It is the slowest it has been in the last 70 years and will continue to reduce. And, yes, Muslims have more children than Hindus but that is because they are poorer and less educated. So, what we really have to do is improve their quality of life!

But that does not suit the Hindutva narrative which seeks to explain away the paucity of both jobs and wives by blaming Muslims for it.

1. Nobody wants to marry an unemployed Jai-Shri-Ramer.

2. There are fewer Hindu girls anyway, because the Hindu gender ratio is worse than the gender ratio amongst Muslims and Christians.

The point I am trying to make is that if you really want people to chant your slogan, from the heart, do not hate on others, just make your cause inspiring, exciting and aspirational.

After all, nobody ordered us to stand up for the national anthem when Chopra won the gold medal. We all leapt up spontaneously to celebrate the much-awaited, hard-won victory! To paraphrase Pritam’s words ‘our hearts compelled us to stand up and sing, so we stood up and sang’.

When was the last time you made our heart feel like that about your slogan, uncleji?