During her golden phase, Kangana Ranaut symbolised talent, blunt-speak, and being self-made in a way few actresses before her ever did. And before she was booted off Twitter (and correctly so) for openly inciting genocide, she contributed many piquant phrases to the national lexicon, my favourite being ‘sasti copy’.

It means ‘not the real thing’, or ‘fake’ or ‘cheap imitation’, and she used it mostly to take derisive digs at Taapsee Pannu—for no other reason that I can fathom except perhaps for the fact that she has curly hair, like Kangana.

Now Taapsee is a fine actress, and I am sure she is not losing any sleep over the sasti copy tag. But I know a lot of people who should.

Because Kangana did get one thing right. 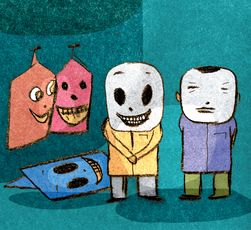 There is a whole lotta sasti copies out there. In fact, it is a full-blown epidemic. Oh, they have got the optics down pat—they look like the real thing and they dress like the real thing, but they are as close to the real thing as muddy water is to Coca-Cola. Because sporting long white hair, a long white beard, lugging around a peacock and being mistaken for Robi Babu is something a toddler can childishly hope to do for a fancy dress competition—but not a grown adult, and not for a state election. Because where is the loving compassion, where is the towering talent, where is the refined mind and the Nobel prize for literature?

Similarly, a short mop of hair, an aquiline nose and a sari from your grandmother’s cupboard cannot transform you into the iron lady of India. Because where are the balls of steel, where is the sheer force of personality, where is the canny intelligence that enforced obedience up and down the party-line?

Slinking about sinisterly, sporting a tilak and stroking your stubble does not make you Chanakya, it just makes you a one-trick pony who sets minorities against majorities. Tonsuring your head and wearing orange robes does not turn you into a ‘yogi.’ It just turns you into a sinister sort of wannabe, a mere imposter mouthing borrowed lines, a sad loser duplicate instead of an incandescent, shining star.

There are sasti copies of vaccines in the market. Sasti copies of remdesivir in the veins of our loved ones. Sasti copies of oxygen that bring not healing but death. Fake sympathy, fake measures, fake concern are being fed to us by GoI. There are fake national awards being handed out. (In the year of Thappad, Sir and Chhapaak, the award for best female actress went to Kangana in Panga, really?) There is even a fake new central vista being built, which, in spite of its Rs20,000 crore price tag, is still gonna be just a cheap copy of the real thing.

In such an environment, anything original, true to itself, and not a sort of sick parody feels like a breath of pure oxygen to poisoned, labouring lungs. And that is why India is rallying around the steady leadership of Pinarayi Vijayan and the fierce, dogged individuality of Mamata Banerjee. These are true originals. Not insincere imitations who have succumbed to theatrics and rabid pandering, and have lost themselves and what they once stood for and, therefore, no longer mean anything to anyone.

Like Kangana, who is sasti copy of the Kangana she used to be.