The black duke and dalit kings

Netflix’s Christmas Day release Bridgerton, a historical romance series set in 1803, has created quite a stir by casting a black actor in the role of the wealthy, immensely privileged Duke of Hastings—something that is entirely period-incorrect and wildly improbable. In doing so, the show is following the example set by the superhit musical Hamilton that cast black actors in the roles of several of America’s founding fathers. The logic for such casting is not so much colour blindness (casting the best actors in the parts regardless of ethnicity) but colour-awareness—casting persons of colour in order to give young viewers role models to aspire to. And not let historicals become a way of covertly celebrating the ‘good old days’ when white people called all the shots, and people of colour could only be either slaves or criminals. (This is something we are seeing a lot of in Indian historicals nowadays, which, in the name of period-correctness, seems to be full of demonised Muslim invaders, patriotic Hindu kings who kowtow to wise, sacred-thread wearing Brahmins, docile women who know their place in society, and mute dalits.)

Of course, I see how the Bridgerton kind of casting can be problematic, especially in a country like ours where huge swathes of people are still uneducated, uninformed or only hazily informed about our history and mythologies. We tend to take our movies as gospel truth, especially the so-called ‘biopics’. I even know of some schools that are screening these films during their history and civics periods. 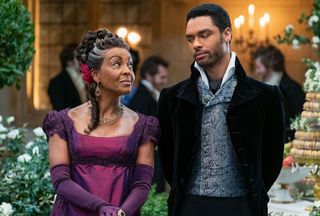 A scene from bridgerton

And so we have collectively swallowed the notion that when Milkha Singh was running the 400 metre race in the Olympics in 1960, he was traumatised by flashbacks of the partition in 1947, and so it was really the fault of the British and Muslims that he ended up coming fourth. We fully believe that Allauddin Khilji ate raw meat with his bare hands, that Sanjay Dutt once hilariously put a toilet seat around the neck of his girlfriend instead of a mangalsutra, that Bal Narendra sold tea to soldiers heading to the war front, and more recently, that Princess Diana used to roller-skate down the corridors of Buckingham Palace listening to ‘Duran Duran’, and that this Christmas Eve, Anurag Kashyap kidnapped Anil Kapoor’s daughter.

Internationally, Netflix’s series The Crown has been accused of wildly misrepresenting the lives of the British royal family and passing off tabloid gossip as history. The Marvelous Mrs. Maisel and The Queen’s Gambit, both very popular Netflix shows, also take liberties with historical accuracy, imagining a female stand-up comic and a female chess prodigy during an era when no such person existed.

Purists argue that narratives like this get in the way of genuine introspection. In the Milkha example, for instance, why did he end up coming fourth, really? What were the shortcomings in his training, his gear, his preparation? How can we, as a nation with sporting ambitions, improve upon that? Which is valid, I guess.

But then again, we live in a world where fact blurs with fiction constantly. We are all about ‘display pictures’ and ‘cover photos’ and faking it. So everything is up for re-representation, really.

And sometimes, the sight of a handsome black duke riding about all Wakanda-like, clicking his fingers to summon white manservants to do his bidding can be more empowering and more of a course-corrector than an in-depth documentary into the evils of slavery.

If our ‘historicals’ are gonna be inaccurate in any case, why can’t we make them so, in a good and empowering way? I am all for handsome black dukes in the 1800s. And sassy female chess grandmasters and stand-up comics in the nineteen fifties. Netflix, now just give us a hot dalit king and a shudra dynasty or two.