Root for your roots

I like to believe I am broadminded and inclusive and tolerant of everything except intolerance. Regular readers of this column may recall how I have often praised Manyaawar’s Har tyohaar India ka tyohaar (every festival is India’s festival) campaign for its large-hearted embracing of all joyful occasions regardless of religious origin. But there’s one festival, celebrated with increasing gusto year on year in India, which seriously makes me roll my eyes and groan out loud. Halloween.

I am not even particularly ashamed to admit that this American import brings out the ranting, raving Ram Sena Bhakt in me. Indian kids, living in India, clueless of the origins of All Souls’ Day and All Hallows’ Eve, running around ringing doorbells, dressed as witches and spooks and bats out of hell, demanding candy with great entitlement in faux American accents. Of course they don’t dress as Vikram, or Betaal, or Stree, or a Chudail with feet turned the wrong way, because OMG that would be so weird—all of them are properly attired as zombies or mummies or vampires or something else sufficiently western and therefore reassuringly cool. 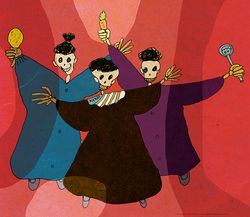 The first time a caboodle of such kids showed up at my doorstep about ten years ago, I asked them what exactly they were celebrating and none of them had a clue. One sassy specimen dressed as a spider tried to shame me by flipping the question back at me crowing ‘Haw, auntie, you don’t know what is a Halloween?’ So I told him Halloween was the ghost of his recently dead grandmother returning to visit the family and was he ready to feel her fingers stroking his hair in the dark at 3am, and that shut him up good. Then I gave them all some batashas and told them to leave.

So why does it get me so worked up? It’s just kids being kids, isn’t it? And ya, sometimes I even agree with the school-moms’ WhatsApp groups that Holi can get rowdy and unhygienic, and Ram Leela dress-ups have been totally appropriated by hardcore Bhakt types, and if you send your kids out to collect eidi (or Ganpati chanda or Lohri goodies) who knows what people might say to them, and so let’s just roll with Halloween (or St. Patricks Day, or even freaking Cinco de Mayo) because it’s cute and harmless and non-controversial and Instagram-friendly.

But I think it goes deeper than that. Pardon my sweeping generalisations but I think a majority of these candy-eating little ghouls and vampire-bats with their clocks set to Pacific time are soon going to take their SATs and run off to expensive colleges abroad. Then they will post Black Lives Matter hashtags on Instagram, while remaining entirely clueless about say, Dalit Lives Matter. Which sucks because they’re sitting right on top of the privilege pyramid and could do so much to help the people below them. And it also sucks because these are children cut off from their roots and it is love and pride for our roots that eventually give us wings.

And so ends my prosy little Manoj Kumar rant. Celebrate every festival of the world, if you like. Heck, Indians even ‘celebrated’ Corona with thali-bangings and band-baajaa! But don’t shudder and abandon our glorious, colourful, eminently Instagram worthy desi festivals to the loony fringe. If you think they’re regressive or polluting, reform them, reinvent them and reclaim them. Even ghastly old Karva Chauth may become less of a pill if both spouses keep it together. Or must we wait for a New Yorker to discover that, and then sell it to us like turmeric latte?