So bhang is the new beef. It is evil, depraved and anti-national, and you can be arrested/assaulted on the spot, no questions asked, for consuming it.

Never mind that Zeenat Aman made bhang/marijuana/cannabis/weed the epitome of rebellion in 1971’s Hare Rama Hare Krishna; that Rajesh Khanna and Mumtaz mainstreamed it from edgy #hippiecool to wholesome #honeymoongoals with 1974’s ‘Jai Shiv Shankar’, shot in Gulmarg in a Shiva temple no less; that Amitabh Bachchan took it down to every street and mohalla in 1978’s Don with the lyrics ‘Bhang ka rang jama ho chakachak, phir lo paan chabaye’ from the super-hit ‘Khai ke paan Banaras wala’ (Banaras, of course, being our venerated prime minister’s constituency); that the line ‘Mary-Jane ka ek packet’ in the iconic ‘Meri laundry ka ek bill’ song from 2008’s Rock On!! is a wink-and-nudge reference to the open consumption of marijuana in colleges; that Amish Tripathi’s first and best novel The Immortals of Meluha from his bestselling Shiva trilogy has Lord Shiva taking a long drag from a marijuana bong in his introductory scene; and that even a channel as prissy and sanskari as Star Plus showed Arnav and Khushi, the iconic super-couple from 2012’s Iss Pyaar Ko Kya Naam Doon? finally confessing their love for each other while stoned on the happy, liberating hit of Holi bhang. 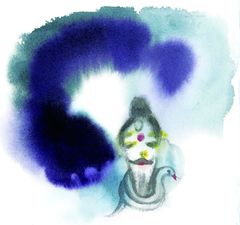 Cannabis is practically prasad for heaven’s sake; it is the air that hangs over Manasarovar lake, it has clearly proven medicinal and pain-relieving benefits, it features in the Atharva Veda’s list of five most holy plants, and although the Narcotic Drugs and Psychotropic Substances Act of 1985 prohibits the production, sale and consumption of certain parts of the plant, the leaves are an exception.

So why is the GOI bent on demonising it?

Well firstly, Lord Shiva is not too popular with the hindutva types. He is too much of an outlier, too broad-minded, too unworldly or ‘bhola’. He mixes with all kinds of lowlife (his wedding procession famously comprised of demons, apparitions, witches and ghouls who cannot be plotted into the meticulously hierarchical caste and class system) and unlike the poster gods of muscular Hinduism, Ram (famous for abandoning his spouse) and Krishna (famous for being polyamorous), he loves, respects and is fiercely loyal to his wife and is therefore a natural ally of the #SmashThePatriarchy army fighting for #JusticeForRhea.

Secondly, it is always good to have something to hit liberals on the head with, especially now that homosexuality has been de-criminalised. Students, poets, writers, filmmakers, vocal creative people who disturb the nationalistic narrative with subversive babble about free speech, unity in diversity and democracy can now be gagged and suppressed for being stoners, if nothing else.

Thirdly, wild speculation, crackdowns and witch-hunting of Bollywood A-listers for using marijuana (and other drugs) provides great circus-style entertainment on our news channels and feeds the schadenfreude-need of the masses (who have nothing to celebrate nowadays apart from the misery of others, preferably those who are richer, from a different religion, or more privileged than themselves.)

And finally, and most importantly, it diverts attention from the real issues, like the high-handed passing of two farmers bills in Parliament, without any discussion or voting or probing by a parliamentary committee.

At the end of the day, cannabis is as good or as bad as alcohol or cigarettes—cheaper than ciggies and less fattening than booze (which is perhaps why it is popular with celebrities.) Overindulgence in any kind of intoxicant is eventually bad for you, but surely, in a reasonable society, adults should have the right to choose.

But reason isn’t really in vogue these days. What is in vogue is stoning the stoners.