I do not know about you guys, but ‘a visible and full-time Congress president’ sounds like a damn fine thing to me. (I would have thrown in ‘accountable’, too, but I am greedy like that.) In fact the whole letter, signed by 23 legit, long-standing party men and women—which addressed the issues of uncertainty over leadership, drift in the party, ideological vagueness, delay in organisational appointments and the absence of free and frank discussions—sounded like pretty much what the doctor ordered for the ailing party.

Of course, resentment and low-key rebellion have been simmering in the Congress pot longer than meat and rice in a dough-sealed dum pukth handi, but this is the first time the seal was actually broken, the steam released and a heart, jigar and kidney biryani that bared the soul of suffering party workers everywhere was humbly and reverentially offered up to the ‘high command.’

Which is why it sucks that all it seems to have given said high command is a bad case of constipation. The Oliver Twists who were demanding a little ‘more’ have magnanimously and glacially been told that no ill-will will be harboured against them (why would something so obvious even have to be stated in a healthy and vigorous democracy?). And pathetically grateful for this reassurance, they have dropped their guns, back-tracked hastily erasing their own footprints while swearing total and complete loyalty, and the status quo, or rather status comatose, has been clamped down again—but only for another six months, we are told.

And every voter seeking a viable option to the BJP has again been left mystified and wondering why in a nation that seems to condemn nepotism as ferociously as India—just look at all the uproar around the death of Sushant Singh Rajput!—the Congress insists on remaining tongue-tied and slavish before its leadership. So just like a disappointed mother who compares and contrasts her children unfavourably with the neighbour’s children (you know the whole ‘Sharma ji ke bete ko dekho’ tactic) I would urge the ex-rebels from the Congress camp to look at, and be shamed by, the stellar example being set by Bhushan ji ka beta, Prashant. 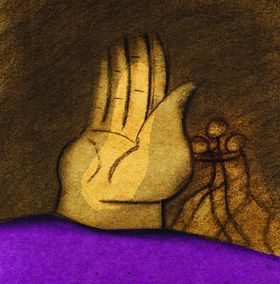 Here is a man who knows how to:

1) Call out misrule and miscarriage of justice for what it is.

2) Stoutly stick to his guns when the going gets stormy.

I mean just look at the tweet he put out: “When historians in the future look back at the last six years to see how democracy has been destroyed in India even without a formal Emergency, they will particularly mark the role of the SC in this destruction, and more particularly the role of the last four CJIs.”

That is telling it with total and devastating clarity, and without even seeking the support of 22 other signatories to give himself a warm feeling.

And when he was hauled up for contempt of the Supreme Court and asked to apologise he stoutly said, “If I retract a statement before this court that I otherwise believe to be true, and offer an insincere apology, that in my eyes would amount to the contempt of my conscience and of an institution I hold in highest esteem.”

Wah, Bhushan ji-ke-bete, waah. Matlab, I did not know legalese could be lyrical, but surely these revolutionary, gently rebuking words are sweeter than any lines penned by Rumi or Gulzar. I would put them in the ICSE English poetry syllabus and teach them to all Indian children if I could. And, of course make them compulsory study material for all Congress Working Committee members before their next ‘meeting’.