My children grew up in Sheila Dikshit’s Delhi. Much before Narendra Modi’s Mann Ki Baat became a thing, it was her calm, grave voice they heard on the radio, every year during the exam season, exhorting them to stay calm and write their papers well. “Apne parche achhi tarah likhna, bina kisi tension ke likhna.” It was a small, but very fresh and thoughtful initiative for those times, and it made them fond of her.

She is rightly credited for giving Delhi the only thing it can be proud of in recent times—the Delhi Metro. And, as Bombay and Bengaluru bumble about trying to get theirs up and running, an ungrateful populace realises what a mammoth task it actually was, and how deceptively easy she made it look. She also privatised the distribution of electricity, got buses and autos to use cleaner fuel, and fittingly, chose to be cremated at a CNG crematorium. 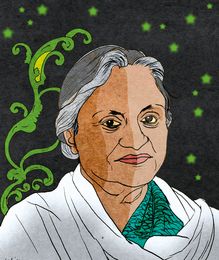 In the good old days, she could be spotted enjoying the city-state she ruled—at the movies, at the melas, always paying for whatever she bought, a small stately figure, hazel eyes shining in appreciation of all things tasteful and aesthetic. Once she zoomed in on a pair of bright red, three-inch-high wooden block heels I was wearing, exclaiming, “I used to have heels like that! Are they back in fashion?” When I told her they most certainly were, the slightly gap-toothed grin flashed. “Maybe I should dig out mine....”

The name plate outside her official residence had her name engraved in English, Hindi, Urdu and Gurmukhi and every time my ‘secular libtard’ children passed it, they would comment on how inclusive that was, and how cool she was.

She was definitely ‘cool’. Her name cropped up repeatedly, (along with president A.P.J. Abdul Kalam’s, another ‘cool dude’) in surveys funded by Pepsi, a brand on which I worked on those days, in the category ‘Youth Icons of India’. They both proved that you did not have to be young in order to appeal to the young, that what we call a Perennial today can have vastly more youth connect than many Millennials.

Another urban legend about her was that as a young mother she was absolutely ruthless about keeping a spick-and-span home. If her kids did not pick up their stuff and put it away by the end of the day, she would apparently just throw it out, donating it as she saw fit. This quickly taught them to be neat. I was much inspired by this parenting technique and decided to employ it. “She’s doing a Sheila!” the kids would scream as I swept ruthlessly through the house, picking up their favorite toys and clothes and tossing them remorselessly into a church box. “Stop her! Stop her!”

Maybe I am being appallingly sexist here, but I do feel really safe when there is a lady leader in charge. The older, the better. If I board a flight and hear a woman’s voice go, “Good morning, this is your captain speaking,” I slide back into my seat, all my tension eased away, and eat the most fattening thing on the menu. As CEOs, presidents, prime ministers and chief ministers, the best of women bring so much competence and calm to the workplace. But even among this small elite brigade, Mrs Dikshit’s name stands out.

After 15 rock-steady years in power, she was finally undone by public anger at the unbridled corruption of the UPA in general and the Commonwealth Games committees in particular, as well as people’s anger over the Nirbhaya rape case (even though the Delhi Police did not report to her, something Arvind Kejriwal has used in his defence so many times since then.) But she was as much an Empress of Delhi as Sultana Razia.

It goes without saying that she will live on in her city-state’s heart. But, Delhi, you need to name a road after her ASAP. A good one. A long one. With lots of trees and flowers lining it. And a big fat Metro station.