Force of the forties

So I am to be an empty nester. My youngest—now in class 12—starts his board exams next week. And, by August, the house will be empty, and my husband and I will be staring at each other’s faces with nothing to look forward to except menopause. But, I am no longer depressed about this stage of my life, or the dimming of my youth, or the three empty bedrooms on the first floor, because of Priyanka Gandhi.

Dressed in broad bordered cotton saris and bright blouses, and wearing an even brighter smile, she is embarking on a brand new career in her late 40s. Her kids are all grown up, her style quotient all figured out, she has lost that diffident quality she had in her 20s and gained the calm self-assurance of a woman who has lived and learned a fair bit, and is going to be taking no crap from anybody. I am sure she is going to be a force to be reckoned with, politically speaking. 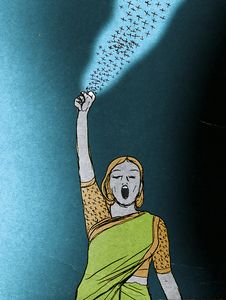 My earlier such poster woman (not girl, please note!) used to be Shobha Kapoor, who lived out her 20s and 30s merely as Mrs Jeetendra, the wife of a megastar, with no major achievements of her own. And then in her 40s, she had this total reinvention, got together with her young daughter, started Balaji Telefilms Limited and gave the world Great Grand Masti, The Dirty Picture and Smriti Irani.

Internationally, the list of such women is even longer and includes people like Toni Morrison, Julia Child, Vera Wang—all women who started working in their 40s and made a brilliant job of it.

Do women get more cooler as they age? I firmly believe they do. Compare the very beautiful, but very silent Young Indira Nehru, the goongi gudiya or silent doll as she was sneeringly dubbed, to the Iron Lady who dominated our politics in the 1970s and 1980s. Look at the younger, defensive, cheated-upon Hillary Clinton to the pant-suited power woman who almost became POTUS. Look at Nita Ambani, the young, pretty school teacher who today is a very powerful businesswoman in her own right. Internationally, look at the sweet, eager-to-please English rose that was Diana Spencer, and then look at how she ‘womanned’ up into a self-confident dynamo of a woman, a power centre in her own right, a queen of hearts who still commands a powerful pull on the imagination of her people.

I was on this panel discussion about women’s empowerment recently, the type that happen on the fringes of ‘more important’ panel discussions about corruption, politics and money at every think-fest or lit-fest. We were talking about why the women’s reservation bill never gets passed and somebody said, “Please understand. The patriarchy loves the girl child. And they love young girls and young ladies. They are sweet, decorative, deferential and devoted. The only problem is that those sweet young girls grow into snarky old women like all of us on this panel. With opinions of our own, dried up wombs, no-nonsense bifocals instead of rose-tinted glasses, and no respect for anything except ability. That’s what the patriarchy can not abide.”

So, do men ‘man’ up, as well as women ‘woman’ up, as they age? I may be a bit biased here, but somehow, I do not think so. I think age weakens men, unlike women, who seem to grow stronger and more queenly with it—more Victorian, more Elizabethian, more Angela Merkel-ian.

And so, here’s to Priyanka’s late entry into politics. May she guffaw as loudly as Renuka Chowdhury, lay down the law as flatly as Mamata Banerjee, and show as much steel as her grandmother did. All us middle-aged auntiejis are rooting for her from our empty nests.

Chauhan is an author and advertiser.