Films like Uunchai play an important role in legitimising ageing

I am planning to watch a movie titled Uunchai on a priority basis. Ask me why? Simple—because I relate to the subject and admire the star cast. It is described as a Hindi-language adventure drama, which sounds odd, given that it is about three elderly gentlemen (Amitabh Bachchan, Anupam Kher and Boman Irani) setting off on a sentimental mission in honour of their beloved friend who passed away. They ambitiously plan a trek to the Everest base camp. But, it turns out to be a far more complex journey involving several strands and complex inter-personal emotional issues. It is mainly about coming to terms with age and its limitations, and ways to negotiate pitfalls that accompany the winter of life.

We all get there, sooner or later. Making a film on as delicate a subject takes courage, no matter how stellar the cast.

Bachchan just celebrated his 80th birthday. Rajnikanth is 71. These extraordinary men have dominated the imagination of movie buffs for over five decades, thanks to consistently superlative performances. Their Hollywood counterparts, Michael Caine (89), Al Pacino (82) and Robert De Niro (79), have not been seen on the big screen for a while, even though they are acknowledged amongst the finest actors of all time. Let us face it, getting starring roles post 70 remains a daunting, distant dream, no matter how many awards and accolades feature in the CV. Henry Fonda was 76 when he and his co-star Katharine Hepburn won an Oscar for On Golden Pond (1981), which remains a classic. 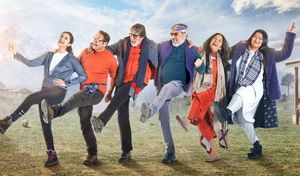 A still from Uunchai

Dealing with age and ageism, sensitively and appealingly, requires a first rate script and a competent director. But, above all, it needs confident actors willing to embrace their years and play their roles with enthusiasm. Bachchan frequently thanks producers for displaying faith in his abilities and signing him for new projects. This shows innate modesty combined with high intelligence, for an actor who has already surpassed other actors two generations after him. Most of his contemporaries are relegated to being footnotes in cinema’s history. To describe Bachchan’s feat as ‘staying power’ is wrong. There are thousands dying to ‘stay’… but, unfortunately, have no takers.

Cinema is a cruel medium, where every new line on the face takes away a few lakhs from the fee. Men are not spared, much as feminists like to believe otherwise. The pressure to look flawless and perfect, especially in close-ups, is forcing young actors to adopt drastic measures, including intrusive surgical procedures. Some of our younger stars are looking ghoulish, like they are at a Halloween ball, because of botched up work they have done on themselves.

It is not just people in the glamour world who obsess over new lines and sagging muscles. A few of my female friends regret going to cosmetologists who have ruined their faces after promising to take off 20 years. Well, yes, the first brush with Botox was indeed fantastic. The women came away feeling rejuvenated and filled with confidence. Then came the next encounter with scalpels and abrasive skin treatments. They were hooked. Till the day their faces turned waxen, and their foreheads turned immobile. They were unable to either smile or cry! Too late, warned their docs, operating out of shabby clinics and holes in the wall in central Mumbai. You can’t stop now! Or else you’ll look even worse.

Films like Uunchai play an important role in “legitimising’’ ageing and providing an emotional context to life, once your prime years are well behind you. Age is not a crime, but is often treated like one. The basic premise of the film is positive. Just like life at any age should be.