Govinda yet to receive recognition he richly deserves

Govinda is clear sighted and upfront about what films attract audiences

In keeping with his reputation of coming late to sets, Bollywood star Govinda made it to his seat across the aisle from me on a flight to Jaipur in the nick of time. We were meeting after decades, and it took me a while to recognise him minus his peach coloured lip and brown eyeliner. His hair was sparser and he was several kilos lighter. But once he broke into a smile, every passenger on the packed flight knew who he was.

It was great catching up with the 58-year-old who has acted in over 90 films. We chatted animatedly for two hours, mainly about films and filmmaking.

Govinda, being a commerce graduate, knows a thing or two about the business of films. Not that this knowledge helped him when his career hit a low, and he was dubbed a has-been. He had flirted with politics (2004-2008) and flopped there as well, by not turning up in Parliament and finally resigning, saying politics is a waste of time. 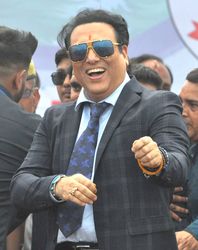 The man I was talking to, was talking sense, despite these downturns. He came across as a thoughtful philosopher who is nobody’s fool. With both his children waiting to make it in Bollywood, Govinda is very clear sighted and upfront about what sort of films attract audiences. A star has to remain a star, no matter what the role or character, he said forcefully, and cited several examples of superstars who forgot these basics and tried to project themselves as the characters envisioned even by great directors like Mani Ratnam (Govinda had played Hanuman in Ratnam’s Raavan).

By now, the excitement in the aircraft was palpable. The crew was requesting Govinda to come to the back of the aircraft for selfies. He was all smiles and courtesy as fans of all ages mobbed him when we landed in Jaipur, where he was scheduled to appear as a showstopper for a prominent jewellery brand. He charmingly dodged the question of how much he was charging. A prominent “influencer” on the flight told me later that his Insta feed went nuts after he posted a selfie with Govinda. My daughter was equally starry-eyed, though she has not watched a single Govinda film! My son said, “I love him! He is the best.”

I recalled the time when the then editor of the Stardust Annual had got Govinda to interview me at my home! A cute reversal of roles. The headline was pretty idiotic, “Mass meets class.” Govinda turned up five hours late, and I was fuming! He walked in dressed as a cop and smartly saluted me! He had come straight from the set after driving for two hours in heavy traffic—all was instantly forgiven. Since we were so behind schedule, I guess Govinda decided to save time by stripping off his police vardi there and then in the living room, shocking my young daughter who exclaimed, “Mama, please ask him to use dada’s bathroom to change.” Govinda laughed good naturedly and scurried off. The editor had prepared a set of questions for him to ask me. He took one look at the list and tore it up. “I have my own questions ready!” That is the quintessential Govinda—confident, positive and fun.

They say his comic timing is unbeatable. On the Jaipur flight I discovered his skills as a linguist. He spoke to me in fluent, accent-free Marathi with several colloquialisms thrown in. Known to improvise his dialogues and add his own punch lines in films, here is a man who is still to receive the recognition he richly deserves. There is an entirely new audience waiting to see him on the big screen in a role that is his worthy of his talent.