Shobhaa De on the doctor with a difference

In his nineties, the beloved Dr Farokh Udwadia is making his theatre debut

Mumbai’s legendary physician, often described as the best diagnostician in India, has a divine presence. I can vouch for it. When Dr Farokh Erach Udwadia appears before his congregation (anxious patients in the spacious waiting area of the Breach Candy Hospital), a perceptible hush descends, with people scrambling to their feet and bowing low to greet him. Despite the reverence and love he experiences each time he steps out, Udwadia never plays God, even if he is treated like one. At 90 plus, his eyes twinkle and his skin glows as he greets the faithful with a smile and a few soft words. For most, just a nod is enough to make them feel instantly better.

Recently, Udwadia debuted as a playwright at the National Centre for Performing Arts in Mumbai, with a one act play titled Oganga, which he wrote on his hero, Dr Albert Schweitzer. Oganga is the term for healer, and Udwadia completed the play during the pandemic as a tribute to the 19th century Alsatian-German theologian, medical missionary and humanist. Said noted filmmaker Sooni Taraporewala, director of the performance, which stars Jim Sarbh, “I fully see the similarities between the two doctors….” True. Both men work tirelessly to heal people and share a passion for music.

While Schweitzer played the organ, Udwadia plays the violin, and they worship Bach. Most importantly, both possess unlimited reserves of empathy and compassion. Udwadia, a Padma Bhushan awardee, always stresses, “Medicine is learnt more at the bedside than from books… read poetry to know what suffering is… you can’t treat merely an organ, you have to understand the human being first.” 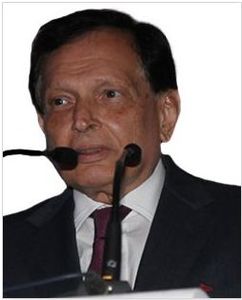 Udwadia belongs to the legendary doctor families of Mumbai. His surgeon brother, Padma Shri Dr Tehemton Udwadia, has a formidable following across the country. Udwadia’s son, Dr Zarir Udwadia, is among the world’s top experts on tuberculosis. I have had the privilege of interacting with father and son, though at entirely different points. I consulted Zarir for my mother, and ‘God’, when I needed an immediate intervention for my son—I literally stormed into Udwadia’s consulting rooms, my eyes flooded with tears, my voice cracking, as I pleaded, “Doc… do something!” And he did. Very calmly and most authoritatively. I remain indebted for life.

Fortunately, our recent interactions have been social and not medical. His lovely wife, Vera, is used to patients swooning at her husband’s feet in public, and smiles indulgently when there are effusive public displays of gratitude. Udwadia frequently ‘diagnoses’ a condition over dinner going by the gait, posture, movements, which he shares with Vera. Both are sought after for their erudition, elegance and refinement.

“Medicine has lost its path,” Udwadia once said, referring to the blatant commercialisation of the medical establishment. He is also not overly impressed by technology and the age of super specialisation. “A doctor needs all five senses to arrive at the right diagnosis. But before any of this, a doctor needs to listen. So often, patients are not given the chance to explain their symptoms…. Doctors, these days, are in too much of a hurry to take the trouble to study the case.” How right he is!

Unfortunately, I could not make it to the premiere of Oganga. It is a passion project put together with love by three amazing individuals—Udwadia, Sooni and Jim. All three are known for their commitment to excellence, and here they are collaborating on an important project that celebrates the life of a great humanitarian who spent his life curing the poor and needy in the jungles of equatorial Africa, with limited resources and an abundance of love. Like our own beloved doc.