Both ladies function under tremendous emotional, mental and physical pressure

What do Sheryl Sandberg (52) and Deepika Padukone (36) have in common? More than what outsiders may imagine, given that they occupy entirely different galaxies. Sandberg (networth of $160 million) announced she would be stepping down from her power position at Meta Platforms after 14 years to “write the next chapter of her life”. It was seen by a section of feminists as ‘selling out’, given the spectacular success of her bestseller Lean in: Women, Work, and the Will to Lead, which urged women to push ahead in their careers and go for the kill. The ‘Tech goddess’ and ‘Meta maker’ disappointed fans worldwide by stepping off the treadmill to focus on herself and her family. Sandberg has two teenagers from her late second husband, Dave Goldberg, and is engaged to TV producer Tom Bernthal, who has three children himself. She calls it a ‘blended family’. Critics dubbed her a ‘mid-life maniac’ for walking away. A fortnight ago, Deepika Padukone, whose net worth is pegged at $30 million, was rushed to a hospital in Hyderabad from the studio she was shooting in, due to a ‘health scare’. The producer promptly rubbished reports and called it “a basic diagnostic test for blood pressure related issues…” This was a huge relief for her fans who were genuinely worried about the actor-producer’s health. Close observers (me, included) had noted how exhausted Padukone looked in her publicity shoots, despite the great couture she was draped in, or the flattering make-up that did not quite camouflage the fatigue in her eyes. Padukone, who married actor Ranveer Singh in 2018, is a global celebrity, who endorses top international brands, is paid Rs15 crore per film, and lives a fantasy life that any young woman would die for. She was diagnosed with clinical depression in 2014, and went on to inspire all those suffering from mental health issues, by setting up the LLL (Live Love Laugh) Foundation that brought mental health into conversations. 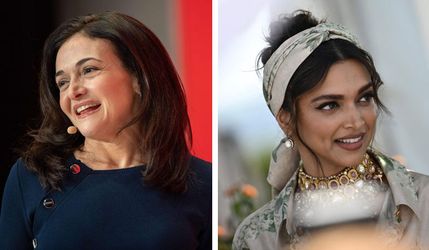 Sandberg and Padukone have enjoyed amazing success from a very young age. The depth of their commitment to what they do has made them icons for working women everywhere. It is a wonder they have managed to hang on to their sanity and continued to strive exceptionally hard to achieve their objectives. It is unlikely I will ever meet Sandberg, but I have met Padukone a few times and always marvelled at how natural and pleasant she is with everyone around her. Both ladies function under tremendous emotional, mental and physical pressure, with millions of eyes scrutinising their every move. Sandberg has stepped back for now after suffering a huge tragedy when her husband died. Padukone and Singh are still to start a family. Given their individual movie schedules, it is a challenge to be in the same city at the same time. While moving to the next phase of their life together, they will have to reconsider several options, and, perhaps, make major life goal changes.

Stress and strain claim too many victims as we struggle to juggle countless balls in the air and constantly walk on the edge of a cliff. Sandberg has sent out a timely reminder to those who want to rethink their priorities and make changes that they are entirely entitled to—regardless of how those changes are judged. Whether or not Padukone suffered a ‘health scare’, perhaps her body is signalling to her to slow down and be kinder to herself—relax more, chill more, laugh more. Punishing shooting schedules and non-stop travel have a nasty way of catching up. Shine on, ladies!