Shobhaa De on the one more modest Gandhi—Gopalkrishna

At 77, Gopal is remarkably agile, supremely alert and wears his identity lightly

Seems almost impertinent to write a chatty column on Mahatma Gandhi’s grandson after a chance encounter at the just concluded Jaipur Lit Fest in the idyllic resort of Soneva Fushi that seems to magically float in the Baa atoll of the Maldives. But Gopalkrishna Devdas Gandhi’s quiet, dignified presence cannot be ignored, no matter what the location. Over four days, we got to spend a few precious hours together relaxing and chatting, with sand between our toes and the wind in our hair.

This was between and after the well-curated sessions that made the JLF-Soneva Fushi so special. I would have thought someone like myself would have alienated the erudite, soft-spoken scholar with such a unique lineage. But we clicked instantly! I was like an excited, immature fan girl, eager for his attention and approval. As soon as my husband met him, I knew a long lasting family friendship had been forged. Before I could say, ‘Soneva’, they were on daak naam terms (my husband’s daak naam is also Gopal; Gopalkrishna became ‘Gopu bhai’, while my husband was addressed as ‘Gopal babu’ by the great man. 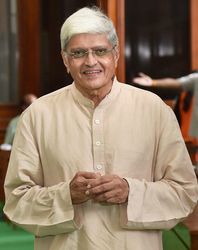 The informality of the venue took care of the standard stiffness one encounters at other lit fests. Here was the distinguished scholar, the 23rd governor of West Bengal, casually strolling barefoot around the island, clad in trendy lavender linen and chatting freely with other guests, while his elegant wife, Tara, and super gorgeous daughter, Amrita, enjoyed every moment of the ambience. All three generated awe and amazement, with the ladies showing up at sand bank cocktails in beautiful, handwoven saris. Earlier, Tara, a wildlife biologist, who loves to swim in the sea, had persuaded Amrita to join her in the azure waters of the Indian Ocean, where it is possible to meet and greet reef sharks (vegetarians), or see the magnificent manta rays gliding in the distance.

Gandhi’s new book is titled Mahatma: Restless as mercury… My Life as a Young Man. It is such an intimate, dispassionate and personal look at his revered grandfather, who like the rest of us, came with glaring fault lines!

When Gopal was discussing the book with Pavan Varma, his former colleague at Rashtrapati Bhavan, he spoke more about ‘Kastur’ than her husband, stressing on their complex, intense and rather strange relationship, where Kastur was expected to play an entirely subservient role—and frequently did not! Given the time the couple spent in various jails, separated for months, Gandhiji’s letters and public speeches were the only connect. It may seem like an odd love story, but Gopal made it very plausible, even tender, discussing the intensity of the feelings invested in the marriage. The expression in his eyes softened each time he referred to his grandmother. And he certainly did not spare his grandfather, critically analysing some of his peculiar traits and beliefs, without filters.

Since I greatly enjoy shooting pictures of people who interest me, I requested the family to pose for portraits. To my delight, Gopal posed away like Milind Soman—a true pro, sans any self-consciousness. At 77, he is remarkably agile and supremely alert. He is disarmingly witty and observant, without hard-selling or boasting—a common and annoying trait evident in some of is contemporaries. The thing is, he wears his identity lightly, like the finest Pashmina shawl nonchalantly thrown over the shoulders. Gandhi sells! I did not get that sense from this Gopal at all. And was pretty chuffed to spend time conversing lightly with all three of them. The Mahatma would have approved of their innate modesty and refinement!