After being an Ambani bahu for years, Sonal still sounds like a visiting foreigner

While I am immensely fond of the Ahmedabad-based Sonal Ambani, and enjoy meeting her, I have a major problem—I cannot understand a word of what she is saying! Sonal’s rapid fire, heavy American accented speech would stump even Americans. The Yankee pronunciation is clearly impossible to shed, even when she speaks Gujarati or Hindi. I tease her good naturedly about the way she speaks and demand an interpreter.

Even though I find it a bit strange that after being an Ambani bahu for years, and living in a palatial bungalow in Gujarat’s capital city—‘Amdavad’—Sonalben still sounds like a visiting foreigner. Interestingly, Sonal, wife of Vimal Ambani (Dhirubhai Ambani’s nephew), grew up in New York, where her father ran an art gallery. Today, the tradition is being carried forward by the attractive and ambitious Sonal, who is a pert and perky mother of two. Age? “Young at heart,” she giggles. 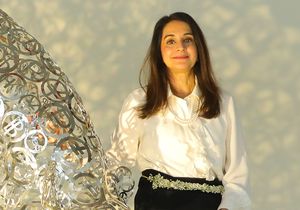 Later this month, her large bronze horse sculpture titled—Riderless World—will be on display at the Palazzo Mora in Venice. It is a prestigious initiative supported by the European Cultural Centre. And Sonal’s impassioned response to the monumental human tragedy—the six million people the world lost during the two Covid years. The impressive sculpture shows a horse with a broken tail and an exposed, carved out abdomen. It is placed on a marble platform, and projected behind it is a screen featuring the names of loved ones from 150 countries, who were cruelly snatched away during the pandemic.

One of my earliest interactions with Sonal was for the coffee table book she produced—Mothers and Daughters—in 2004, featuring 101 high profile maa-beti jodis .This was a tribute to her mother, Suman Prabhakar Sheth, who was diagnosed with ovarian cancer. Proceeds from the sale of the book went towards cancer research, as Sonal urged women to get a pap smear done on a priority basis.

I remember spending a wonderful afternoon at her home over a lavish Gujarati lunch served traditionally in silver thaalis. It was a delight to meet her father-in-law, Ramnikbhai, who was home for lunch and presided over the meal. It was Ramnikbhai who had started the textile division for Dhirubhai, and the brand ‘Vimal’ was named after his son. We chatted about art and politics, food and culture, while Sonal fluttered around, instructing the family cook in American-Gujarati!

I met her more recently at Tina and Anil Ambani’s son’s wedding party. Sonal was dressed in haute couture, with serious emeralds and diamonds adorning her. We chatted animatedly as her ever-indulgent husband and young son waited for us to finish the conversation. Years ago at the lunch in their grand and gracious home, I had noticed how close and integrated the family is, with children who are respectful, well-mannered, clever and considerate.

Sonal was talking about her forthcoming show in Venice and understandably excited about it. I noticed that she had changed her hairstyle and lost a lot of weight. She pouted petulantly and touched her (non-existent ) “double chin’’. Her hair was poker straight and parted at the centre. I told her I preferred her with a little more weight, and her hair, a lot less severe . It was intense and pure ‘girly talk’.

She warmly invited me to attend the preview of Riderless World in Venice. I jauntily agreed. Like it was that easy to fly thousands of miles to admire Sonal’s wonderful sculpture. I came down to earth quickly enough—if only Venice was as accessible as Vadodara!