Whatever be the price of honour, it is definitely worth paying, says Shobhaa De

I think Gangubai Kathiawadi (marvellously portrayed on screen by Alia Bhatt) has the answer to one of the stupidest, most banal questions on earth: What do women want? The answer is obvious: “Ijjat’’ (izzat or respect) and izzat should be staring you in the face. Women want what men want. And a lot more. We are talking basics. Respect, dignity, opportunity.

As I write this column on International Women’s Day, I do not feel either cynical or angry. There is no cold rage, nor any frustration. There is a quiet recognition of ‘self’, which surpasses all else. These days I get to spend a lot of time with my two female, four-legged companions, observing them as they negotiate different spaces and hold their own. 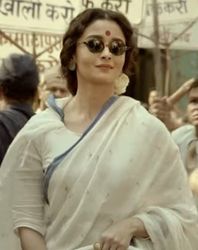 They remind me of myself. Bijou is a frisky, restless, curious young thing, constantly getting in and out of trouble. She is the teenage me. Gong Li is the grande dame—somewhat imperious and aloof—as she is entitled to be at her age. She is me today. The interactions between the two ladies are fascinating. I wonder—which one will get the better of whom eventually? It is the sum total of the lives of all women forced to devise their own survival strategies. The struggles are different, but a struggle it is.

Watching Alia Bhatt’s transformation from a sex worker to a rakhwali (brothel owner) herself, I wondered what sort of a toll it must have taken on Alia as she lived with the complex character for three long years, playing the title role of Gangubai Kothewali. I have seen the lives of the badnaam women in the infamous cages up close and personal, since my school was not very far from those overcrowded lanes. Later, as a journalist, I went several times to meet some of the girls and spent time listening to their stories.

That Alia convincingly conveyed the pathos and the hidden strength of Gangubai is commendable. Gangubai takes on a new role within the community, as an activist with political ambitions, fighting for the rights of the oppressed kids, who are denied access to education. In reality, it was a battle Gangubai didn’t win, unfortunately. But her spirited efforts have not been forgotten; a small bust of hers is installed and prayed to, even today. This is feminism at work, ground up.

Like the moving ‘sunflower story’ from Ukraine. Since most of us have been following the awful war in the Ukraine, it is most inspiring to observe the intense engagement of women in the crisis zone. Already, a powerful symbol of peaceful resistance has emerged in the form of sunflowers that stand for Ukrainian pride and the citizens’ resolve to fight on.

The story goes that an elderly local lady offered sunflower seeds to a Russian soldier and told him they would automatically get embedded in the soil of her beloved country once he lies down to take his last breath. And through his death, something positive and uplifting will emerge—a field of sunflowers.

I was very moved by the imagery and as fields of sunflowers started to pop up on assorted social media sites, I marvelled at the lady’s gesture. This moment will remain frozen in history. Along with the video of the lone, battle-weary Ukrainian soldier reciting Persian poetry, as he stands in a huge, snow covered field, waiting for the bombs to drop. At the worst of times, hope manages to bloom and keeps us going. To this anonymous woman and man, the world owes a lot.

International Women’s Day is many things to many people. It is a good day to take stock and decide what we are prepared to do or even sacrifice to get ijjat—whatever the price, it is definitely worth paying.