Shobhaa De on the essential Rahul Bajaj: The Big B of business

Rahul knew he was larger than life, and revelled in playing up his image

Let me not trot out a list of Rahul Bajaj’s business achievements—those are chronicled extensively and can be easily accessed. For me, the most interesting aspect of the 83-year-old’s legacy remains his iconoclastic personality.

Having known and observed the late industrialist, popularly dubbed ‘Hamara Bajaj’, I can confidently say, his feisty, often bombastic statements invariably came from a good space. If he did indeed possess a monumental ego, that too, emerged from his unshakeable sense of self—faking modesty was not his thing! His blunt, no nonsense attitude showed how much he enjoyed being ‘Rahul Bajaj’, and fed off an ever present rapt audience, respectfully hanging on to his every pronouncement.

This was the essential Rahul—physically and intellectually towering over his durbar. The roar and tone of his voice were sufficient to silence those around him. Rahul never disappointed his audience, delivering punches and hitting hard, knowing the full impact of his words. Nobody dared to mess with the patriarch. 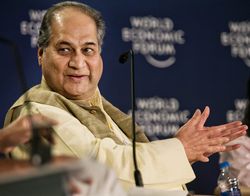 My husband shared a warm friendship with Rahul. They were a part of a tight group that met regularly to sort out matters of the world! These were eagerly looked forward to sessions, planned meticulously to the last cup of chai and the first bite of chilly cheese toast. ‘The Boys’ returned from these outings, happily recharged, with fresh insights and perspectives on current affairs, global concerns, local politics, business policies and more. Rahul’s invigorating, cerebral and analytical contributions were later gone over in hushed tones.

When the pandemic put an abrupt end to these ‘addas’ at various five star venues, the group switched to Zoom calls. This was not the same thing at all, and proved to be a strain. I had no choice but to overhear the loud and animated conversations, with a pre-determined agenda, to ensure the focus did not shift.

Rahul knew he was larger than life, and revelled in playing up his image. Flamboyant and vain, he did not tolerate either fools or rivals. Recently, a common friend commented on Rahul’s quirkiness while assessing a candidate to head one of his divisions. The man being recommended was handsome, educated, articulate and super-confident. Rahul took under a minute to tell my friend, “His qualifications are good. But he may steal the limelight from me! Get me a low-key plodder, not a high profile chap like this guy.”

Years ago, I was hosting a chat show—Power Trip— with an impressive line-up of India’s best and brightest. One segment involved an informal exchange between the guest and a person of his/her choice. Rahul chose his wonderful daughter Sunaina (Kejriwal), and I loved the mutual adoration between them.

It was clear that Sunaina was his golden girl—his expression softened and altered as I asked her a few questions about her relationship with her legendary father. Rahul the ‘awesome’ was instantly transformed into Rahul the ‘softy’. I like to believe his outward show of belligerence was a bit of a pose.

Rahul, the family man, took his role as the head of his large clan very seriously. The same conservative person dazzled global communities at Davos with his savoir faire. Much as Rahul was proud of his Marwari roots, he was at heart an international bon vivant, who enjoyed the company of glamourous ladies, appreciated his drinks, music, dancing, fine clothes and finer conversations.

Rahul lived life rajah size, but along with his outgoing persona came a quieter philanthropist who generously shared his wealth with multiple charities. As the grandson of freedom fighter Jamnalal Bajaj, Rahul was deeply influenced by Gandhian values (the Mahatma being a frequent house guest).

Rahul’s family is busy planning a fitting tribute to the beloved head of the $14.4 billion empire. I suspect they will skip the usual, sombre and boring prayer meeting, and host a jolly sundowner, where Rahul’s friends and admirers will celebrate his marvellous life in the same spirit as he lived it!