I am guessing Katrina Kaif’s ‘Kala Chashma’ will be off when she marries Vicky Kaushal on December 9, at what is being billed as ‘The Wedding of the Year’ by Bollywood fans. It is a very interesting match, given their dramatically diverse backgrounds: Katrina, 38, was born in Hong Kong to Suzanne Turquotte. Nothing is known about her father (it is not cricketer Mohammed Kaif), but she has several siblings, who were raised in the UK like her.

Vicky Kaushal, 33, is an award-winning actor, born in a humble Mumbai chawl to a stuntman father and homemaker mother. Both Katrina and Vicky have made it big on their own and can be counted as top bracket stars today. Katrina is among the highest advance tax-paying actresses, and has an impressive 55,736,589 followers on Instagram. 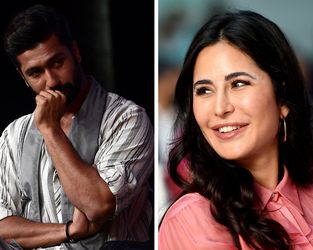 The first time I interacted with Katrina was years ago at an award function, where we were seated at the same table. She was and remains, ethereally beautiful. She was polite but distant till she was called up on stage to present an award and speak about the event. Yes, her strong Brit accent was a challenge to decode, but her presentation was flawless and fluent—I was floored. Subsequently, I would run into her at prominent social events, where she conducted herself with sophistication and poise; no loud ‘filmy’ behaviour.

Yes, Katrina’s roller-coaster love life made headlines, but she never dignified those wild rumours and hung on to her privacy. Incredibly enough, she has managed to maintain excellent relationships with all her ex-es, notably, the mercurial Salman Khan, who considers her family.

Vicky Kaushal attained superstardom after his brilliant turn in Uri—The Surgical Strike, with a series of top-notch performances in Raazi and Gangs of Wasseypur. Like his wife-to-be, he has maintained a low-profile life, with only a single faux-pas (caught in a candid video at Karan Johar’s infamous party).

The big question is what happens to Katrina’s soaring career once she becomes Mrs Kaushal, and maybe, opts for early motherhood? I suspect she will follow Anushka Sharma’s path, and set up a production house.

Katrina’s last outing has been opposite 54-year-old Akshay Kumar in Sooryavanshi, in which she sizzled in a rain dance, while playing a doctor (don’t laugh!). Known to be shrewd, ambitious and intelligent, perhaps her future energies will focus on building a Vicky-Kat brand, much like Virat-Anushka.

Meanwhile, fans are agog as they hang on to every tiny detail about the forthcoming shaadi. Will the bridegroom opt for a full on panju, balle balle wedding and arrive on a white mare? Will Kat’s Sabya lehenga set off a new trend? Who will be invited and who, not? How cool that Vicky-Kat have beaten Ranbir-Alia to the altar! Aren’t we silly to waste so much time on such stuff? Maybe not!

With a vicious new variant staring us in the face (Omicron), God knows we could do with a little levity. Nothing like a super glamorous wedding of great looking movie stars in a magical setting (Rajasthan), to keep our spirits buoyant.

Katrina’s remarkable success story as an ‘outsider’ in the closed world of Hindi-speaking Bollywood is nothing short of a feat. As for the Punjabi munda marrying an English rose (insiders insist she is 100 per cent foreign, with no connection to India), this is the way forward in an industry that stands for inclusivity on all levels. ‘Abhi toh party shuru hui hai…’ Congratulations!