Mrs Wankhede was in her husband’s corner when he needed her: Shobhaa De

The saga of Sameer Wankhede—the high-profile Narcotics Control Bureau zonal director who had the ‘gall’ to arrest ‘Prince Aryan’ (as fans have gushingly rechristened him) is many things to many people. But in the eyes of Kranti Redkar, his 39-year-old attractive and feisty wife, he is nothing less than a superhero. ”I know my husband,” she declared dramatically during a press conference in Mumbai, as she went on to spiritedly defend the Indian Revenue Service officer who seems to be in hot water at the moment. Till she decided to jump in and fight for her husband’s credibility, Kranti was best known as a Marathi ‘item girl’ (as actors who dance to hit tracks are described), whose song ‘Kombadi Palali’ was her sole claim to fame. Born to a filmmaker father, Kranti, a true-blue Mumbai mulgi (girl), married the controversial Wankhede in 2017, 11 years after Wankhede’s first marriage to Dr Shabana Quraishi. Had Wankhede not hit the headlines after arresting Shah Rukh Khan’s son during the infamous drugs raid on a cruise liner, chances are Kranti would have remained an unknown person— active on social media (328k followers), with twin daughters, Zyda and Ziya, to raise—while her husband went about cleaning up Bollywood (Wankhede played the main role in the Rhea Chakraborty arrest, after the tragic death of Sushant Singh Rajput). 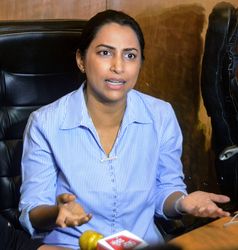 It was only after Maharashtra minister Nawab Malik went ballistic after Aryan’s arrest and made serious allegations against Wankhede that the public sat up and took notice of the outraged wife who attempted to counter Malik’s charges across media channels, in an act that received a mixed response. There were supporters who lauded her for taking on the mighty, after she insisted, “We are not rich people… my husband is an honest government officer…. We are worried about our safety.” Then came the detractors who asked belligerently, “Why can’t Wankhede be man enough and stand up for himself? Why is he sending his wife to defend him?”

Kranti was no match for Malik, who was out to discredit Wankhede after publicly stating he would see to it that the IRS officer lost his job! Well, so far Wankhede has not been sacked.

The public interest in the case has all but disappeared after Aryan’s release on bail. That leaves a very distressed wife, still attempting to protect her husband’s tattered reputation and tarnished honour. Wives of high-profile men who are in a soup, never have it easy. If they speak up, they are dubbed attention grabbers out to milk the situation for personal publicity. If they keep quiet and stay out of the fray, they are accused of being ‘scared’ and ‘lacking a spine’.

Kranti has done what her conscience dictated. She was in her husband’s corner when he most needed her open support. What happens next is hard to predict. It is a complex case, with powerful protagonists at play. If Malik is done with Wankhede, the man can quietly go back to work, provided he gets to retain his job. SRK seems keen to get his own commitments back on track, while his son gets the required help from nutritionists and psychological counsellors. But one thing nobody can take away from Wankhede—he brought the issue of mass scale drugs consumption in Bollywood/Mumbai into public discourse. That—and the fact that his wife Kranti loves him to pieces!