The one word I cannot bear these days is ‘woke’. Alia Bhatt’s new commercial for a wedding apparel brand has caused hackles to be raised across the board. The 28-year-old, award-winning actor is being heavily trolled for trying to be woke—and failing! Personally speaking, I liked the commercial for what it was saying—that brides are not ‘things’ to be ‘donated’, and we should stop calling young girls ‘paraya dhan’. The message is conveyed pretty powerfully when the groom’s parents join the brides’ and jointly perform what Alia calls ‘kanyamaan’ (honouring the bride).

She urges viewers to drop the age-old term—‘kanyadaan’ and switch to the more dignified ‘kanyamaan’. Critics are attacking the brand and Alia, for promoting such a concept without comprehending the deeper significance of the Hindu marriage ritual, which, they insist, has existed for centuries. While it is fine to disagree with the premise of the commercial, personal attacks on Alia and her family must be condemned. There is also a nasty attempt to bring other religions into the debate, with trolls pointing out the Christian custom of ‘giving away the bride’ in church, and the Muslim practice of ‘mehr’. Several voices are condemning Alia for being a bit too ‘woke’ for her own good! The audacity of the commercial is also being severely damned by those who cannot stomach the underlying message, and have not bothered to look beyond the obvious. 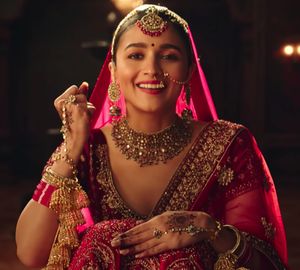 Today’s bride has a mind of her own. Alia’s bride challenges stereotypes, and does so with a smile and zero aggression. The commercial is aimed at a certain section of our society—the one that buys designer bridal wear from the brand she promotes. Agreed, Alia’s earlier outing for the same brand (Dulhanwali feeling) was lapped up by fans who totally related to a nervous bride’s mixed emotions and anxieties as she is walked to the marriage pandal. That was not a ‘message’ film—it was infused with empathy and sentiment, which touched many chords. It was innocuous and non-controversial, unlike the latest one.

It will be interesting to see how the current uproar will impact Alia’s commercial standing, given that she ranks in the top ten Indian celebrities in the endorsement’s stakes, with a brand value of $36.5 million.

Controversies are not new to Alia, given what a nose dive her popularity took after the tragic death of actor Sushant Singh Rajput, when movie fans were polarised by the nepotism issue and went after Karan Johar along with all the young stars he had launched—including Alia in Student of the Year.

Well, the movie business has taken a huge hit during the pandemic, and actors are just about staggering back to work on sanitised locations. Alia has quite a few interesting projects in her bag, like Jee Le Zaraa, which features Priyanka Chopra Jonas and Katrina Kaif, and is billed as a ‘road trip’ movie, much like the other film Zindagi Na Milegi Dobara produced by the same team (Farhan and Zoya Akhtar). As for the outrage over the commercial, let us hope it starts a few healthy, meaningful conversations which go beyond the mundane. Questioning patriarchy is an overdue need in our deeply prejudiced and hierarchical society. I am no expert on wedding rituals, but let us take a closer look at the symbolism embedded in the commercial, which attempts to give a beloved daughter far more respect within her family by treating her as much more than a precious possession that can be passed from one family to the next.