I am a newly-minted fan of ‘Sherni’ director Amit Masurkar: Shobhaa De

I took my time to watch the latest Vidya Balan starrer Sherni. I groaned: ‘Not another woke film’, since I had started and abandoned it thrice over, unable to get into the mood of Amit Masurkar’s film, currently streaming on Amazon Prime.

And then, suddenly, it happened! I found myself inside a beautiful forest in Madhya Pradesh, following the tragic fate of a tigress and her two cubs, as a quietly determined, newly appointed forest office (brilliantly played by Vidya Balan) fights a battle she knows she is not likely to win.

This is Masurkar’s third film, and my first Masurkar experience. I had skipped the national award-winning Newton (2017), which was India’s official entry to the Oscar’s and made a mainstream star out of Rajkummar Rao, playing a fiery election officer who is raging against a corrupt system. Masurkar’s first was Sulemani Keeda (2014), a comedy, I had zero knowledge of or real interest in.

Let us call Sherni my virgin Masurkar movie—one that has left me panting for more.

Masurkar at 40 is almost alarmingly self-assured for a man who started off as a student of industrial engineering in Manipal. He says it was Quentin Tarantino’s Pulp Fiction (the 1994 cult film) that dramatically changed his focus and made him deep dive into movies.

Sherni is about courage and female fortitude in the face of daunting odds. Masurkar could not have picked a stronger actor than Vidya for the de-glamourised role of a forest officer, who has seen it all up-close for nine years, but will not stop trying to beat the bureaucratic system. Vidya brings enormous dignity and intuitive intelligence to a role that demands not just commitment but a deeper understanding of social issues. 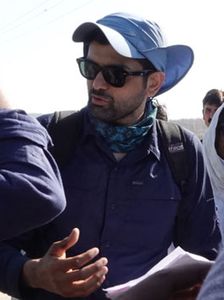 The Masurkar-Balan combo, along with a stellar ensemble cast, including real life forest guards, have succeeded in creating a visually stunning world, where sounds and sights of the forest are seductively and lovingly captured by a technically sensitive crew that allows the camera to linger over small but necessary details of the wild, where a proud sherni roams.

Masurkar is very clear about one thing—authenticity. And that, he insists, can only be achieved if filmmakers move out of their Mumbai offices and conduct meaningful, extended conversations with people outside.

The parallel track that delves into the human sherni’s inner landscape is equally fascinating. Vidya captures the delicate domestic dilemmas in her marriage, with admirable restraint and subtlety, as she struggles to find ways to save the marked sherni in the jungle. While watching Vidya negotiate these two terrains, I marvelled at her choice of roles and her awe-inspiring controlled on-screen emotions, where every side glance and small smile successfully conveys her own struggles as a woman professional in a non-traditional posting. Up against narrow-minded, corrupt and devious men, she manages to hold her own, with the support of a passionate zoology professor, Hassan Noorani, superbly played by the versatile Vijay Raaz.

I am a newly minted Masurkar fan! I cannot wait to watch his next venture, possibly a web series, going by the hints thrown. OTT platforms are providing adventurous movie-makers the most amazing opportunities to showcase unconventional subjects. Sherni comes with a strong feminist subtext that is marvellously understated. It made me think of all the human ‘shernis’ I know. Most of them have given up heroic battles and retired wounded—back in the very same jungle they sought to escape.

Tiger conservation is at the core of Masurkar’s Sherni—but the narrative takes it beyond the survival of one courageous sherni. It is about courage, itself. Female courage. And all the shernis out there.