I have to admit I was initially blown away by the Rahul Dravid road rage commercial that went viral after Virat Kohli tweeted it (Dravid is not on social media platforms). I was most impressed by the creative folks behind this effort, given that Dravid is known for his extreme reticence. Self-control of any and every emotion, on and off the field, is Dravid’s hallmark. How clever to cast him against type!

Then came the troubling questions—why did Dravid agree to recast himself and challenge his own, scrupulously crafted image as The Wall? Commercial reasons? Or some other long-term strategy to reposition himself? Did the new angry Dravid work? Has he acquired a brand new constituency since the commercial went viral? Do people accept rowdy Dravid? How will he be able to live up to the ‘Indiranagar ka goonda’ tag?

I revisited the commercial recently and this time around, I found it gimmicky, manipulative and unconvincing. Making a well-loved celeb do something out of the box is a terrific idea. But the messaging has to be carefully calibrated. What are we seeing and hearing in this much discussed commercial? That road rage, expressed with such aggression, is acceptable and understandable? That it is okay to threaten a startled, elderly lady in the car alongside? Or, it is normal under these circumstances (being stuck in a traffic jam), to smash rear view mirrors? And finally, does the ridiculous waving of the bat in a threatening gesture and yelling, Indiranagar ka goonda hoon mein, make the legendary cricketer more macho and heroic? Please! A cricket bat being used as a weapon is unacceptable, especially when it is wielded by a highly respected cricketer. These are strictly personal observations and reservations. 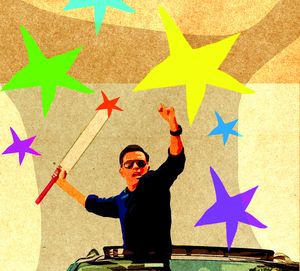 There has been a great deal of chatter around the commercial, but does anybody remember or care what product was being endorsed? I’m scratching my head and trying to recall….

Here is the flip side: What if Sania Mirza had been shown expressing road rage and waving her tennis racket, while screaming, ‘Hyderabad ki goondi hoon mein’. Would we have found it cute? Imagine Mithali Raj in a similar commercial. Acceptable? Women in sports have to adhere to a certain bland and goody goody image, whether it is on their social media posts or in the endorsements. This is true for sportswomen across the world.

The Dravid commercial raised several issues about how the man popularly known for his calm is being reinvented as ‘everyman’. Our cricketers are not just celebrities, they are venerated across India and held up as role models. That is my point—should a role model be projected as an out of control, crazed with rage guy behind the wheel? Crazed enough to challenge a co-motorist and shout, “Come, come man… you just come.” Come and do what? Fight a duel? Cred, the creators of the ad, have managed to get a huge amount of mileage for their efforts. I have read interviews of how they were not sure of the mild-mannered Dravid being able to project white rage. But, man, when he let go, he really let go! The dormant volcano erupted and how!

Women who vent in public are called hysterical harridans. An angry woman is dubbed unfeminine and unattractive. An angry man? Depends! Amitabh Bachchan made a career out of his ‘angry young man’ image. Our sweet and sincere Dravid could be on the verge of starting a new innings as a movie star! Good luck, bro.