This is going to be one hell of a fight! The Naagin from Nandigram is pitching herself against the Cobra from Bollywood. Both are equally poisonous and well-matched. Not sure about didi’s dancing skills, but she has made a career out of making everybody else dance to her tune. That is, till a formidable combo (Prime Minister Narendra Modi and Home Minister Amit Shah) decided to change Didi’s soundtrack, take over her territory and hog the close-ups!

Khela Hobey (game on) is the Trinamool Congress’s battle cry in West Bengal. Chief Minister Mamata Banerjee is a fighter all the way. So what if her top honchos have jumped ship at the last moment? So what if Mithun Chakraborty, once her chosen one, is now with the BJP, repeating old dialogues from past movies? Didi is giving it back, with catchy dialoguebaazi of her own! Besides, she has a trump card―Rahul Gandhi. The Dimpled Darling will effectively split the vote and it will be advantage didi.

With all the bizarre shenanigans going on, one chap has emerged sharper, shrewder, smarter than the rest―Dada (not didi’s brother!), otherwise known as Sourav Ganguly. He has chosen to stay out of the snake pit, even though he may have been promised the chief ministership by BJP bosses. “Everyone cannot be everything,” stated the canny cricketer, playing with a straight bat. Correct. Why walk away from such a prestigious/lucrative job―president of the cricket board―to get your hands dirty in a filthy political swamp?

Having interacted with all three (albeit, briefly), here is what I think: the coolest of the lot is Sourav―the shrewdest, too. He is suave, soft-spoken and a strategist who does not show his cards. He also knows how to adeptly wiggle out of tight spots, with little collateral damage (reference: his ‘marriage’ to Nagma). Next comes didi―a fire-breathing dragon lady, capable of going to any lengths when cornered. Her brand of politics is not in sync with today. But who is brave enough to tell her to stop shrieking and start negotiating? Mithun used to let his grinding hips do the talking in the past. But at 70, those gyrations have become a joke. Oratory and mimicry are not the same thing, Mithun da. Besides, why be a poor man’s stand-in for Akshay Kumar on a political podium? 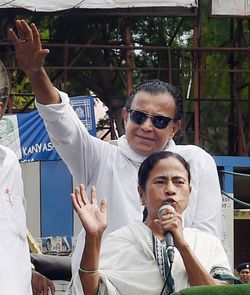 A file picture of Mamata Banerjee with Mithun Chakraborty | PTI

At the moment, optics and high-pitched accusations are driving this key election. If the BJP manages to win a majority, it will be a tight slap in the face for didi’s supporters. She can accuse her rivals of “tolabaazi (extortion)”, but countless critics will accuse her party of the same. As for Mithun, who was magnanimously described as “Banglar chhele (Bengali boy)” by Modi, it remains to be seen what this cobra’s bite will deliver at the polls. “I am not a harmless snake,” he boasted to the crowd at the Brigade Parade ground. “One bite and you will turn into a photograph.” Whatever!

The smooth and savvy Sourav has kept his shirt on so far. One hears a lot about the behind-the-scenes offers thrown at him. His sense of timing is legendary―do not be surprised if he jumps into the fray at the right moment. Maybe, he is being saved up for the last and highly crucial round of campaigning in the tumultuous state, where everyone wants to start a revolution.

Didi has had her chance to transform West Bengal―only her constituents can say whether or not she blew it. “You talk of ‘Sonar Bangla’ after selling Delhi,” she thundered in Siliguri, accusing Modi of several failings, including not being around citizens during the Covid-19 crisis, while she was in hospitals and on the streets. The crowd roared its approval. But cheers do not necessarily mean votes. Will West Bengal groove to ‘Disco dancer’? Ki bolbo (what say, eh)?