How fabulous really are those Bollywood wives from FLBW?

Like everybody else who was tickled at the thought of watching a poor man’s version of the wildly successful Keeping Up with the Kardashians (13 years, 19 seasons and still going strong), I tuned in on November 27 to catch the latest Netflix reality series―Fabulous Lives of Bollywood Wives. Oh dear, oh dear, this was anything but fabulous, I groaned. It was downright tawdry, tacky… and taxing, to boot. Perhaps, deliberately so. Keeping Up with the Kardashians is equally terrible―but it still dominates ratings.

The only star wife I knew from this show was Bhavna Pandey, better known these days as Ananya Panday’s attractive mother. What was this demure and well-mannered lady doing with those other overdressed women, jabbering mindlessly about nothing at all?

All four protagonists are connected to Karan Johar, one of the canniest producers in Bollywood. This level of ‘dumbing down’ cannot be for real, you think naively. But it is! A show like this works best when it appeals to the lowest common denominator.

All these wives are tough cookies. They run their own businesses besides swanning around as star wives―even though their husbands are far from being thought of as A-listers. Which makes the wives ‘B-listers’, seen more as Gauri Khan’s groupies. Despite that, they have created a niche for themselves as ‘aspirational lifestyle ladies of leisure’, who claim to go shopping only in a Rolls Royce. 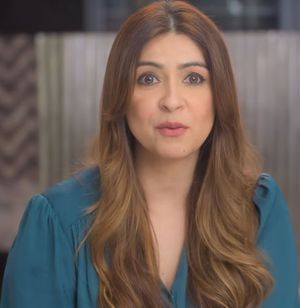 Coming to Bhavna, I have known her for over 20 years, as a quiet, efficient and sensible planner of swish events for brands like Cartier and Louis Vuitton. As an invitee to these posh evenings, I can vouch for Bhavna’s classy approach and smooth efficiency, dealing with prima donnas and tantrum-throwing stars. She is a naturally friendly and relaxed woman, which somehow does not shine through in this series. I remember her patient handling of a few over-demanding invitees asking for special privileges during a ‘royal’ elephant polo event in Jaipur. I also recall her discreet management of a slight scheduling glitch during a dinner at a Dubai event, which had the glorious Italian superstar Monica Bellucci as chief guest. My husband and I were seated at the head table with the diva, and there I was a goggle-eyed fan staring unblinkingly at Bellucci, who had required some urgent calming down!

I had also known Bhavna’s late in-laws, Dr Sharad and Dr Snehlata Pandey, both of whom were well-liked, well-admired ‘Bandra-ites’, highly sought after by Bollywood stars. Bhavna’s gregarious husband, Chunky, was an unlikely actor back then and did achieve a modicum of success. He was better known in the movie world for his antics and sense of humour.

As a businesswoman, Bhavna’s net worth is pegged at an impressive $20 million. She has been running a fashion label called ‘Lovegen’, which does have its young fans sporting easy, breezy, sensibly priced collections.

Watching Bhavna in FLBW, I was reminded of her original understated personality and wondered about the on-screen avatar, which, while not being as cringe-generating as the other three, is still a far cry from the person I remember interacting with on multiple occasions.

That is reality TV for you―there is nothing authentic about any of it. Even so, listening to these four cackling over ‘Le Bal’ and how prestigious it is to be invited to a pretentious soiree where young ladies are compelled to waltz with their proud daddies, inside an opulent ballroom in Paris, made me double up with laughter!