Like many others, I was most reluctant to watch Indian Matchmaking on Netflix. Till my daughter Anandita forced me to give it a shot. Once I started, I could not stop! And the only reason I stayed hooked was to see more of a 57-year-old woman named Sima Taparia. She was the superglue that held this enterprise together. In India, we have traditionally accepted the concept of an arranged marriage. It has worked for centuries, and is likely to work for a few more—if marriage itself lasts. We are a shaadi-obsessed nation, and no matter what the counter-narrative, we continue to endorse ‘official’ match-making as one of the ways of finding ‘suitable partners’. No wonder then, that Sima has acquired a cult status, not just in India but across the world, after the mega success of the show. Despite the jeers, memes, digs and taunts about her views, Sima has converted a 15-year-old hobby into a highly lucrative business model today. And the wonderful thing is that she remains pretty untouched by her newly-acquired celebrity status.

How do I know? I met her over high tea hosted by Mumbai’s St Regis Hotel, with a hand-picked group of her admirers. Covid-19 protocol was firmly in place, as excitement mounted in the swanky suite. It was as if the curvaceous Kim Kardashian and not a pleasantly plump happy Marwari housewife-turned-star was about to walk in. Believe me, when she entered, there was applause! There she was, dressed and groomed like she appears on camera—and, equally relaxed as she got introduced to awestruck invitees, her well-dressed husband Anup by her side, smiling broadly, proudly taking in the warm response to his wife. 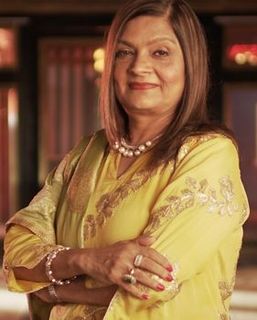 I jokingly told Sima, “All of us are willing to ‘adjust’, ‘compromise’and ‘be flexible’.” These are the key words and instructions Sima sprinkles during her show. A show that now attracts fans from across the world. Over garam chai and cupcakes, we chatted like old friends, even though we had just met. That is the thing about Sima—not only is she comfortable in her own skin, she makes everyone else around her feel the same. Sima is a natural. What you see is what you get—no tricks. It is this precise trait that works big time on camera, since the show is unscripted—she walks in blind when the door opens and takes it from there.

Sima herself received over 3,000 biz requests after Indian Matchmaking aired. At the moment, she is processing just 135 of those, and says disarmingly that she is unable to take on any more. Today, she has enquiries flooding her website from as far away as Nigeria.

Sima states flatly that she sticks to a ‘certain status’ and does not take on any and every client. Recently, she shared a post that went viral about her own arranged marriage at age 19. But her story had a charming, romantic twist! One can sense the rapport and closeness between husband and wife as they exchange glances and communicate non-verbally, with enviable ease. Sima’s forthrightness and candour are her trump card. My daughter Avantika mentioned her divorced-with-children friends, who are interested in starting again. Would ‘Sima Aunty’consider such alliances? Sima’s prompt reply, “Why not? There is a market for them also.” I told her to consider gay matches, given the ever-growing segment for same-sex shaadis. Sima paused for a few seconds. It was something she had not thought about or attempted so far. I kept pushing, “See the numbers… tell your producers. It’s all about inclusivity these days.”I showed her a text message from a gay friend: “Please ask Sima to find me a rishta.” She smiled, “Why not? There is always a special someone for everybody.”