The boyish charm of the international tabla virtuoso is still intact. Zakir Hussain at 68, could pass off for a 48-year-old hippie, with his carefully disheveled mop of hair, casual shirt hanging over his slacks and the unmistakable ‘rock star’ air of utter nonchalance as he surveys a small but select audience, gathered to fete him—India’s number one percussionist at a unique event. It is the launch of Dayanita Singh’s maquette (mock-up of a book) dedicated to the man she calls her guru—Zakir! In her address, she thanks Zakir effusively and profusely for inspiring her to become a photographer at age 18. She talks about their first encounter in Ahmedabad, and how it changed her life. Through all the recounting of those precious years, when Dayanita’s camera chronicled moments (big and small) of Zakir’s incredible life during the ‘80s, the subject of her adulation (and the star of the evening), kept staring at his well-manicured nails or cracking an ironic, self-deprecatory smile at her generous praise. When he spoke, it was with immense humility and admirable tact, steering the conversation towards the life of artistes and interjecting it with backstage anecdotes. Like the times he shared the dressing room with the greats (Hariprasad Chaurasia, Ravi Shankar, Shivkumar Sharma and others). He dismissed off the title of being the ‘number one tabla player in the world’, claiming there were at least eight or ten equally good if not better players around. Then what was it that made him such a global star and marquee player? He confessed disarmingly, it was his ‘savoir-faire’. About the rigorous riyaaz required to make it big in the highly competitive world of classical music, Zakir, a Padma Bhushan awardee, gave all the credit to his legendary father, Ustad Alla Rakha, who would wake up young Zakir at 3am daily, when he was just seven, to begin the day’s punishing musical routine. “He didn’t touch the tabla at all… instead, my father spoke to me about music, narrated stories, talked about the various ragas… and invited me to sit on stage by his side during performances, observe everything… learn,” said Zakir. 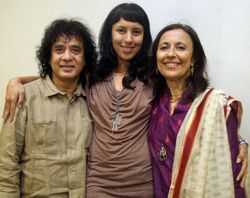 Behind the cultivated image of an international ‘playboy percussionist’ is an aloof, reserved man, immersed in his music. His family life is never on display, and few have met his Italian American wife Antonia Minnecola, a Kathak dancer and Sitara Devi’s disciple. They have two daughters, and are fond grandparents, with a family home in California. Zakir prefers to let his tabla do all the talking, except when he is being interviewed on camera. As he hinted, everything becomes a performance eventually, if you are practically born on a stage. What I found fascinating was his method of prepping before accompanying another artiste. “Establishing a rapport is important. The exchange on stage is intuitive and non-verbal. There has to be a deep sense of trust and understanding between the musicians. This can only happen after you know one another’s lives. I like to figure out what the person eats, I want to meet the wife/husband and children, visit their home. Share a meal with them…. this is an essential part of the tayaari,” said Zakir.

Later, as he mingled with guests, over platters of artisanal cheese, he seemed far more relaxed, as did Dayanita herself. Their hour-long interaction had been expertly steered by veteran writer Nasreen Munni Kabir, who has done an interview-based book on Zakir (2018).

It was a thought provoking evening for all of us, as we went out into the cool night, with words and images leaping inside our heads and hearts. What a lovely collaboration! Wah, Ustad, Wah!