I WATCHED a poised and beautiful young person wearing a floaty, flower print dress (the sort British debutantes wear to garden parties in the summer) with matching orange heels, being chased by photographers at a recently concluded fest in Kolkata. It took me a minute to recognise the glamorous Trinamool Congress MP from Jadavpur, as she made her way to the dais to talk about ‘success and happiness’. She was impeccably groomed and perfectly made up, and I could not stop staring! I recalled her debut appearance in Parliament, at which she, along with another beautiful MP from the TMC—Nusrat Jahan—had effortlessly broken a sartorial rule by showing up in a chic and very stylish trousers and tucked-in-shirt ensemble. Well done, ladies, I said to myself and cheered them on. 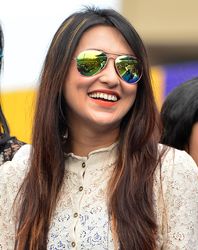 Now here she was, talking easily and unselfconsciously about her early life and what success means to her. Fans in the first few rows were applauding her every remark. She was playing the worshipful crowd like a seasoned politician. And to think Mimi Chakraborty, an actor with several big hits in Bengali cinema, is just 30-years-old and a novice in politics. But hey—she campaigned hard, won with a convincing majority, and is there to prove to detractors that there is much more to her than being ‘The Most Desirable Women-2016’—a title bestowed on her through a poll. Today, she juggles an incredibly busy schedule which involves running between her constituency, attending Parliament, handling endorsements, doing personal appearances and, of course, acting. She lives by herself and prefers it that way, she confessed to her fawning admirers. She calls herself a ‘pet parent’ and insists her emotional needs are met when she gets home after a tiring day to be enthusiastically greeted by her four-legged companion.

As I listened to her views on happiness and success, I was interested in what she had to share and marvelled at how smoothly she balanced priorities. For a former model, who left her parents’ home in Jalpaiguri to seek her fortune in Kolkata, Mimi has managed to steer her life adeptly, juggling multiple roles and expectations and clearly impressing the tough Didi (Mamata Banerjee) sufficiently enough to get a ticket. Mamata, shrewdly, counted on Mimi’s star power to woo her constituency and bag that important seat.

Mimi is no pretty-faced doll with a highly decorative presence and not much else. As she continued speaking, gauging the mood of the crowd and engaging with each person who asked a question, in a warm and personal manner, one could see a promising and long-term career in politics for her. I was amused when she said she feels happy when she bakes a cake, sticks a toothpick into it, and the toothpick emerges clean to indicate the cake is ready to be removed from the oven.

Mimi spoke emotionally about her early years when she did not receive any support from her folks, and had to fend for herself. She talked about the thrill of starting a fresh school term with new books, which her mother could ill-afford, but made sure to provide. Mimi’s first pay cheque was Rs15,000, and she recounted, with unfiltered glee, how thrilled she was at getting “so much money”. There was a childlike wonder in her eyes as she remembered her years of struggle, stopping once or twice to wipe her tears. None of this seemed rehearsed or fake.

Bravo! Mimi… you have broken several stereotypes and so quickly at that. The bold decision to shed the sari in favour of pants for your first day in Parliament made a powerful statement about your individuality and sense of self. You deserve all the bhalobashi (love) you receive!