The time was late, the weather cold and most shops in Delhi’s Khan Market had already downed their shutters. I ducked into a fancy gift shop, least expecting to run into royalty! I heard a lady being addressed as ‘Your Highness’—the lady’s back was to me. She turned around and it was Ashi Dorji Wangmo Wangchuk, the beautiful and gracious Queen Mother of Bhutan.

We had last met nine years ago at Mountain Echoes, the jewel of a lit fest in Thimphu, of which Her Majesty is the chief patron. It had been a warm and memorable encounter for several reasons. We were at a reception for visiting authors, hosted by then Indian Ambassador Pawan Verma, at our impressive embassy. The Queen Mother, the eldest queen of the fourth king of Bhutan (father of the present king, Jigme Khesar Namgyel Wangchuk), had launched her book at the fest, and spoken from the heart on the gorgeous Kingdom of Bhutan. 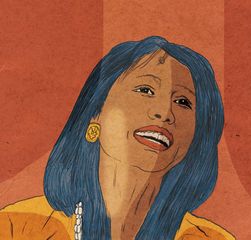 That was also the very day King Jigme had announced his engagement to a young, beautiful commoner, Jetsun Pema, to cheers and applause from his subjects. Just as the guests were discussing this development, it was announced that the king and his fiancée would be attending the reception. It may have been an impromptu decision, because it threw protocol out of the window, as security officers scrambled to prepare for the king’s arrival at what would otherwise have been a typical lit fest party—informal and possibly rowdy. I was seated on a sofa next to the Queen Mother, talking about her book, family life, environment, fashion and movies, when a palace official came over to inform her about the royal couple’s imminent arrival. She swiftly turned to her daughter Sonam, and after a short exchange with her, excused herself and stood head bowed at the entrance to receive the royal guests as their cavalcade drove in. A hush descended over the gathering. It was an electrifying moment—all eyes were on the handsome king and his fiancée, both dressed in grand ceremonial robes, and so obviously in love. The Queen Mother greeted them with a deep bow, as guests awaited their turn to be introduced.

It was during this short trip to Bhutan that I got to spend a little time with a remarkable lady whose commitment to furthering the interests of her country through cultural, educational and environmental exchanges came through so clearly. Her calm and grace as she handled questions and explained the nuances of an ancient culture charmed and impressed all those who met her. She was kind enough to subsequently give us signed copies of her coffee table book—Treasures of the Thunder Dragon: A Portrait of Bhutan.

And, I least expected to run into her buying scented candles in a market in Delhi. We reconnected instantly, and I asked if we could take pictures. Looking on and smiling broadly was the Bhutanese Ambassador to India Maj Gen Vetsop Namgyel. A small entourage was helping the 65-year-old Queen Mother make up her mind as she browsed through the store. I watched her glide past counters, a poised, perfectly groomed lady in black, and marvelled at her equanimity. Here she was, with her highly privileged background and status, behaving with admirable humility. I had just finished meeting a bunch of pompous ‘prominent people’ with overblown egos and no real attributes worth praising. I had watched them throw their weight around in the Authors’ Lounge at the Times Litfest, and been totally put off by their crass attempts to attract attention. What a contrast to this modest royal, who has authored three books and works tirelessly for her people, especially the farming communities! Lit fests are great equalisers. It is easy to tell the empty talkers from those who command and not demand respect. The Queen Mother is truly Bhutan’s national treasure, and I look forward to meeting her again, hopefully in Thimphu.