There are Diwali parties, and then there is THE Diwali party—the one hosted by the Bachchans. It is much looked forward to, and over the years it has acquired a near-mythical status. It was being hosted after a gap of two years, and when Jaya Bachchan phoned to extend an invitation, I was delighted to accept. It is one scintillating evening, which sees most of Bollywood on the lawns of Jalsa, though not in the open air. The Bachchans are considerate enough to create an air-conditioned marquee, lined with food stations and bars, as superstars converge to greet colleagues, play cards, and have a fabulous time.

This year, as in previous years, there was a terrific melange of established stars and newbies. There was a fair representation of the vast entertainment industry, given Amitabh’s multi-discipline career—from movies to KBC. And there he was, standing tall, meeting and greeting every single guest with the same level of warmth. Think about it—there must have been close to 400 invitees that night. Amitabh, who had been spotted at a neighborhood hospital just a few days earlier, displayed zero signs of any illness. If anything, he seemed out to prove skeptics wrong—his health seemed robust, and his energy inexhaustible. This was my biggest takeaway from the long night. Here was a stalwart, a legend… who had not sipped even a glass of water, nor stopped for a nibble during those tiring hours of being a supremely welcoming host. He had not sat down even for a few seconds! And the smile on his face as he spent hours posing for selfies, looked genuine. This is nothing short of a feat. 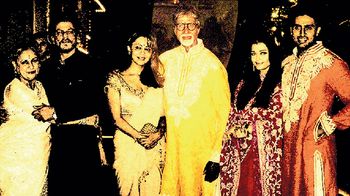 Amitabh is one of the most active senior citizens on social media. He has been ahead of the curve in many respects, but this advantage over other, far younger stars, cannot be underestimated. He is sensitive enough to realise the worth of each selfie posted by awestruck invitees to his Diwali celebrations. And, he was not about to pass up on priceless posts! That is brilliant thinking, I concluded, watching rows of fabulously dressed guests dutifully queuing up for a cherished photo op. I wondered if the stars of today, so many of whom were present, would ever be able to acquire Big B’s stature in the movie industry. He has weathered countless storms and controversies, major health scares and other challenges. Despite that—there he stands—tall and imposing, treating every guest with the same attention and warmth.

Bollywood’s newbies floated around in elaborate designer outfits, mingling easily and behaving ‘starry’—fame is a tricky commodity to handle. These kids are just about learning the ropes. I observed them all with amusement—from Tapsee Pannu to Karthik Aaryan, Sara Ali Khan to Ananya Pandey. And, I recalled seeing Amitabh at the famous Stardust parties hosted by Nari Hira more than 45 years ago. He was also a newcomer to the super glam world of Mumbai’s tinseltown. But at no stage did he jump around from table to table, trying desperately to attract attention. It took him a while to establish himself after gaining a toehold in Bollywood.

We left by the time Shah Rukh Khan arrived, and walked away as hero number one. His admirable presence of mind and courage helped saved the life of Archana Sadanand, Aishwarya Rai Bachchan’s longtime manager, when her lehenga caught fire at the party. Aishwarya rushed to her rescue while SRK doused the flames with his sherwani, receiving minor burns in the process. Despite SRK’s heroic act, the evening belonged to the tireless host.