The chirpy Mrs and Mr Singh

From the very first time we met, I hit it off instantly with Shivinder Singh—the 44-year-old former promoter of Fortis, who is currently in judicial custody while under investigation for a Rs3,000 crore fraud. Of course, I am being naïve when I say this, but he did not look, nor sound like a crook. I found him and his beautiful wife, Aditi, utterly charming—it is rare to come across such a couple! As today’s teenagers put it so aptly, “They are totally into each other.” None of it appeared contrived or fake to me. It was a true-blue ‘mutual adoration’ society, with plenty of unabashed PDA, giggles and blushes. He was under the scanner even then, but looked completely unperturbed. I took several pictures of the couple, including a delightful one on the dance floor. At another family function, I had met their extended clan and spent a long afternoon chatting with Mrs and Mr Singh, admiring Aditi’s jewellery and his sense of humour. Then too, he had responded easily and confidently to questions I posed about the scandal that had created headlines internationally. I had urged Shivinder to write a book and present his side of the story, since press reports had been pretty one-sided. He had readily agreed and said he had been thinking about it, even though the matter was sub judice and he would have to leave out a lot of the hot potato material. I assured him his life would still make compelling reading—it had more masala than any movie script—religion, money and fraud! He laughed and we exchanged numbers to stay in touch. 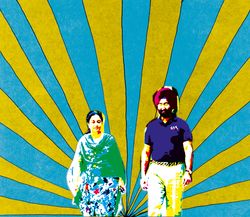 The last time we ran into each other was significant. It was at the wedding reception for a mutual friend’s daughter. Many big ticket billionaires had jetted in for the event, only to jet out a couple of hours later. Aditi and Shivinder were doing the same. I did not ask if they were taking a commercial flight. The others had arrived in their personal Bombardiers. Earlier the same morning, another mutual friend had sent me an ominous text saying the Singh brothers were going to be arrested soon. I asked Shivinder chattily about the news, like it was normal for high profile business folks to face arrest. Well, it is becoming the new normal, I guess, because he shrugged, smiled… and I clicked some more pictures of the couple. This time, they did not dance. But everything else was intact—the PDA, giggles, jokes. I brought up the book again and he said he had signed up with a publisher, but was waiting for a competent writer… someone who would be in sync with his emotional state and sensitive to his point of view. That was not too difficult, I said and offered to recommend a few names. He said he had most of the material in place, but was getting stuck somewhere. Aditi kept staring at her husband, with love pouring out of her eyes. She added how intense her husband was… writing candidly about his life under the present circumstances was proving to be a huge challenge. It was time to say goodbye. No reference was made to the impending arrest. It was as if Shivinder genuinely believed such an action would not be taken.

I can hardly comment on the case, given that I know very little about how Religare Finvest Ltd (RFL) managed to siphon Rs1,000 crore to shell companies, according to the Economic Offences Wing. Now I read Shivinder has sought interim bail from the Delhi court and wants to settle. For me, Shivinder and Aditi will forever remain the chirpy, forever-in-love couple… childhood sweethearts-turned life partners, joyfully in tune with one another, if not the world. Through sickness and in good health. Through good times and bad.