The ‘Tough Titty’ from the wildly popular Netflix series, Wild, Wild Country (2018), came back to India after 34 years. It has been an incredible homecoming for one of the most controversial women in contemporary popular culture—Sheela Patel, better known as Ma Anand Sheela of the Bhagwan Rajneesh scandal. Today, at 70, she is basking in her newfound fame as she travels across her old stomping grounds, each move being filmed by a Bollywood crew for a documentary, and a possible movie on her incredible life as a sanyasin in Osho’s ashram—first in Pune, and later in Oregon, US.

I am sure she could not have envisaged such a rip-roaring reception to her dramatic return to the land of her birth. Sheela is the toast of the super-rich in Mumbai and Delhi, with movie stars, politicians and socialites falling over backwards to host lavish soirees in her honour. She has been provided a luxe wardrobe by designer Sanjay Garg, and I believe she is being paid a fat fee to cover her travel and stay, and a little something more for herself and the two ladies who are her companions and live with her in Basel. 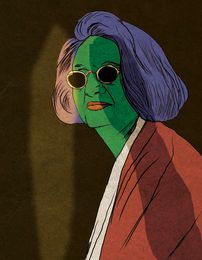 I was requested by a private organisation to be ‘in conversation’ with her at a closed-door event in Pune. I accepted with enthusiasm, given how well we had hit it off when we last met in Prague at a similar members-only event. She had said she was afraid to come back to India, since there were many enemies waiting to eliminate her. Why? Because she knew too much about the sinister goings-on inside the Osho empire? Or because she was a convicted felon who had served 39 months on charges that included attempted murder, wire-tapping, grand larceny, kidnapping and bio-warfare. Sheela denies all charges and talks lightly about her incarceration, as if it is quite okay to have to defend oneself in these circumstances. She had demanded a security cover if she ever returned to India.

The Sheela of today is a transformed woman, who wants to stick to a carefully prepared script—love, beauty, social service. Any reference to the past (chronicled by her in the best-selling book titled Don’t Kill Him: The Story of My Life with Bhagwan Rajneesh) is shrugged off with a wave and a soft dismissal, “Let’s move on….” Most people who meet this version of Sheela have no knowledge about her shocking past, which suits her fine. Young people are awestruck and rush to hug this benign-looking, diminutive lady, who makes it a point to confess, “I was a young girl when I met Bhagwan…. I fell in love with him.” The audience goes “Awwwww”, and willingly abandons any hard questions about the long-term relationship with Rajneesh, who she insists she did not have sex with… and no, there were no orgies in the ashram, as outsiders believe (and… errrr, many can prove).

Ma Sheela is a shrewd, intelligent woman who has figured out her time starts now. Life has thrown her a second and very generous chance. If she wants to make herself relevant and heard again, she will have to capitalise on the world’s interest in her as of now. Her Bollywood debut is already creating ripples, with Sheela nominating Alia Bhatt as the person to play her and Aamir Khan starring as the charismatic Rajneesh. Helming this sizzling project will be Karan Johar’s Dharma Productions. A good fit for both.

For a woman who showed her middle finger to an Australian journalist on camera and hurled the choicest abuses at international news conferences that overshadowed Ronald Reagan’s during prime time, Sheela is on a roll once more. Albeit in a totally different avatar. Reinvention suits Sheela. Unfortunately, the past cannot be wished away.... She may have ‘moved on’. But others have not. The fiery ‘Tough Titty’ will have to deal with this nuisance, alas.